Hey, Generation X, I’ve got news for you. We’re forty-something, guys.
This fact was carried home to me tonight upon leaving the fantastic live show of Amanda Fucking Palmer and the Grand Theft Orchestra at the Middle East Downstairs. You see, to leave the place, you have to climb a flight of stairs. Apparently, my 45-year-old knees can stand up (and pogo) for four straight hours just like they could when I was 25. But boy do you feel the difference when it comes time to climb.
Ow.
Anyway, my other thought about the audience was rock on Amanda for getting all these people away from the Internet for a night. There was a wonderfully high nerd quotient in the crowd tonight, as well as a wonderfully high female-to-male ratio, which probably meant more female nerds than are usually gathered in one place outside of a Harry Potter convention (yes, I spend my vacations at Harry Potter conventions, what of it?). Like an HP con, there was quite an age spread, too, from the teenagers to those my age and those even older. No one seemed particularly dismayed by this. The common thread among us wasn’t “type” (punk, hipster, nerd, hippie, jock, all of the above, none of the above) or generation, but AMANDA FUCKING PALMER.
Speaking as someone who has spent a good bit of her life trying to get people out of their boxes and crossing the lines, I state for the record, this is awesome. We live in the post-modern age. In the arts, screwing around with the boundaries of genre, making mash-ups and subverting tropes, collage and juxtaposition as commentary, these are all the tools in the post-modern arts toolbox. Applying the post-tools is an art form itself. Music, fiction, visual art, dance, the tools apply to all. So isn’t it about time we started applying those tools to the categories of identity? Gender, class, “type,” etc? Society will still try to tell you who to be, but it’s more imperative than ever that we don’t allow others to define us or our worth, isn’t it?
Wait, sorry, this isn’t the time for a rant about how LGBT youth are still committing suicide or how women who aren’t empowered sexually aren’t empowered at all or any of my other soap boxes. Or is it? Well, let me tell you about the show, which as you might have guessed from my assessment of the audience–but which carried through the acts on the stage–was as affirming and category-busting as it gets. Details, photos, links, embedded songs, and much opining, under the cut:
The first of the opening acts was Jherek Bischoff with four “hot” strings from Boston in a quartet put together just for the show. (He’s putting together a different quartet in each city. The mind boggles. These are musicians who like challenging themselves.) Jherek played the electric bass while conducting the four strings. I can’t really describe what the music is like, but to me it sounded like Jherek listened to a lot of Adrian Belew and King Crimson on his way to and from violin lessons. In other words, I quite liked it!
Here, try this:

The quarter arrangements for this show were much gentler and lyrical, however. One comment he made to the audience was, “These songs were actually meant to be played in rock clubs but somehow they keep ending up in fancy schmancy places. So thank you for listening and for being so quiet and respectful.”
Next up came another member of GTO in another incarnation, the dance music group Simple Pleasure fronted by Chad Raines, doing his level best as the love child of Richard Simmons and Johnny Rotten. It was as if as a child Chad’s only two videotapes were an 80s workout video and The Decline of Western Civilization, Pt 1. With maybe a touch of Velvet Goldmine thrown in and The Pixies. Thoroughly entertaining in an over-the-top way, it was as if the trio made great dance music that at the same time made fun of being dance music. Chad plays guitar, and sometimes slide whistle (!), while his two compatriots rocked the electronics, keyboard and computer/sequencer. “We play dance music,” Chad said after their first song, “so, you know, fee free to act accordingly.” He also announced that the second song in the set, Copacetic, was about Providence, RI, which prompted cheers from many in the crowd. They also did a gay pride song, “LGBT,” which had the crowd chanting and singing along with a chorus that went something like “the W with the W and the M with the M” complete with hand gestures for W and M. It’s like YMCA reincarnated in a way that even jaded hipsters can appreciate.
I can’t embed it here, but swing over to CD Baby and listen to the sample of the track called The Tunnels, which they played, and you will see why I thought of David Bowie during the Simple Pleasure set, too: https://www.cdbaby.com/cd/simplepleasure
Finally, there was one more small act before AFP&GTO took the stage, a solo piano piece by Tristan Allen. Tristan is a winsome, fey, and earnest young thing, Amanda produced an album of his previously, and well, you may as well just listen to this:

The audience at one point began to lose their focus, but he reeled them in, until moments of his playing prompted spontaneous cheers. It was like watching a great solo dance performance… except it was listening and it was piano and it was good.
Then came the main event, Amanda Palmer and the Grand Theft Orchestra. I was a backer of their Kickstarter (I think I was like #50, an early adopter…) so I’ve been hearing a few tracks from the album as they’ve been slipped out to us. They kicked off the show with the first song that was released back when (May), “Do It With a Rock Star.” It’s a powerful, turn-your-speakers-to-eleven kind of song anyway, but live it really thumps. (I believe you can still hear the song and download it if you wish, from Soundcloud? https://soundcloud.com/amandapalmer/do-it-with-a-rockstar-surprise) I remember the Twitter-splosion when it was released to Kickstarter backers and so many people were like “It so eighties!” Yes, and yet it’s so far BEYOND what it invokes. It is both of the genre and transcends it, like the best post-modern art. And a perfect way to launch an energetic, raucous set, which turned even more raucous when the second song they went into was an old Dresden Dolls favorite, Missed Me… which they promptly proceeded to deconstruct by switching instruments every other verse. Ah, it was brilliant. It was one way to take a highly dramatic song and camp it up, setting the stage for entirely different emotional notes to be hit than in the DD days, and still show off both the virtuosity and fun side of the band.
I can’t and won’t go through the whole set song by song. I also did not take much in the way of photos. These shows are meant to be experienced LIVE as performance art should be, not “captured” for later. You’ll never really capture the moment, except as a memory, as a feeling, as what it meant to you. That said, here’s one image I did take: 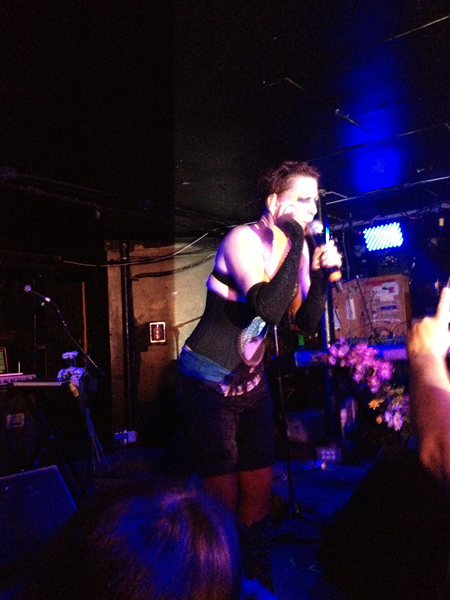 The references and threads and connections continue. I don’t know why they chose the name “Grand Theft Orchestra” but I see it as a nod to the incorporations of influences. Hiding one’s influences doesn’t add entertainment value: revealing them, and reveling in them, does. It was around the time I took the photo I realized there’s a way in which Amanda’s stage persona is the reincarnation of Tim Curry’s Dr. Frankenfurter from the Rocky Horror Picture Show. Reincarnations are never exactly the same, of course, but are a new embodiment of an ineffable spirit. You may have heard that the Harvard Square movie theater, where the Rocky Horror Picture Show has played at midnight since time immemorial (well, actually, only for the past 28 years…), had closed. But no art ever dies, it just gets incorporated into what comes next. (Although, by the way, I see the cast of Rocky is doing a show at the AMC Boston Common on August 4th at midnight, details at https://www.fullbodycast.org/).
Let’s see, what else. The strings came back for two songs. Amanda billed the first one as “the saddest song ever.” (Trout Heart Replica) But then before the second one (Bed Song), she said “I lied. THIS is the saddest song ever.” To which Michael McQuilken, the drummer, said, “Because Strings Equals Sad.” We were promised horns later, however, because horns=fun. And in fact later, there were horns! Some of the horn players had only just arrived and they had never rehearsed with the band. “What comes after DIY when you have stuff just happening like this?” Amanda asked. Someone shouted in response, “Last minute shit! LMS!” To which the crowd began chanting “LMS! LMS!” which turned into a kind of Paul Schaeffer “Late Night” moment in which the band spontaneously broke into death metal. This prompted a Neil Gaiman reference, which caused the band to spontaneously break into “Enter Sandman” by Metallica. No, I’m not kidding.
There was also talk of zombie mermaids, and taking everyone in Boston on a cruise to Nairobi. It was a chatty show. Which was very fitting for a kind of “hometown” gig and an audience full of eclectic nerds. There were many more songs from the new album, including Want it Back, The Killing Type, and Massachusetts Avenue (which evoked Jonathan Richman and the Modern Lovers), and also a few more choice faves from the Dresden Doll days. “Girl Anachronism” touched off the closest thing to an old style pre-mosh pogo/slam pit I’ve seen. (Moshing is prohibited at the Middle East.)
Okay, I should stop writing now and post this and go to bed. I have a chiropractor appointment in the morning and boy am I going to need it. I will note that if you want to catch them on tour, tickets are on sale now for the fall dates. In Boston they’ll be playing the Paradise Rock Club November 15-16-17, and I’ve been trying to buy tickets ever since getting home and Ticketbastard keeps telling me they’re undergoing maintenance. I will be grabbing them as soon as I can!