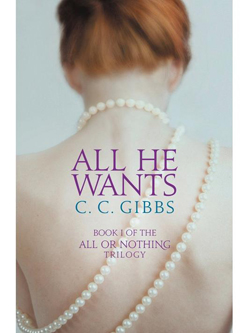 . I found it reminiscent at first of one of my favorite books from last year, BARED TO YOU by Sylvia Day, in that Dominic is a yes, dominating, no-nonsense uber-CEO type who frankly expresses his attraction to the heroine. Unlike BARED TO YOU, though, which doesn’t go explicitly into the world of BDSM, ALL HE WANTS most deliciously teases that edge. Which of course made me curious to ask the author, CC Gibbs, all kinds of questions.
1. We know right from the get-go that Dominic is an experienced BDSM player… and although the power dynamic between him and Kate is always superheated, he introduces the more physical aspects of BDSM – orgasm denial, sex toys, nipple play – very gradually. Unlike in some romances I’ve read, I found that to be a really realistic depiction of how it often is when one partner is experienced and the other one’s first reaction is, “I’m not into that kinky stuff.” Were you striving for realism there? What’s the place of realism in the fantasy of a romance?
CC Gibbs: Oh, shit, are these supposed to be fantasies? I’m not sure I got the memo. The thing is – my characters seem real to me. Their world seems real. And most of their activities aren’t anything others can’t do – with the exception of the private planes and huge money. And I know there are some readers who have that too. But the sex — pick your favorite kind – can be a fun activity for anyone, love is out there in the world in a great variety of forms and the happily ever after is a universal hope that exists in most – I want to say all – of us.
However – I will admit to heightening my reality with Google research and pages and pages of interesting accessories and props I tear from magazines.
That said, my characters literally talk to me, I listen and key in what they say. I call it a twilight zone kind of writing. And to answer the question about differences in sexual experience, Kate’s character was relatively inexperienced and despite Dominic’s almost pathological need for control, he’s not a Neanderthal, so their relationship unfolded accordingly. Their personalities drove the narrative.
The hardest part about writing is taking the time to define every little freaking detail so the reader sees what I see, hears what I hear, vicariously feels what my characters feel.

2. This is far from being your first romance, but it’s your first under this name. How was writing this book different from writing your others?
CC: What I found I liked best – quite by accident – was that the three book format allowed character development that’s not possible in a single volume. You’d think I could have figured that out beforehand, but duh. In fact, I’ve always resisted a trilogy with the same characters, although I’ve often written books in series. So it was a lovely feeling – really getting to know Dominic and Kate.
3. One of the things every romance author has to do for almost every book is figure out what the heroine does for a living. How did you pick forensic accounting? I was totally fascinated by that – and I didn’t expect to be!

CC: I’m not altogether certain since I’m a just-wing-it writer, but if I had to guess, I’d say my current interest in hacking had something to do with it. I find myself absolutely fascinated by hackers. I’ve read a little about the profession. I was writing another book about a male hacker when the fifty shades phenomenon hit the publishing world. And bottom line, I like smart women. Smart, mouthy women.
4. Was it fun, or challenging, or both, to have so many locations in the book? Amsterdam, Singapore, Hong Kong? I loved all the “food porn” in the story, too! Is it important to you when writing erotica to engage other pleasures, too, besides the purely sexual ones?
CC: Jeez, those are really hard questions for a writer who never thinks about anything until some voice out of nowhere tells her what to key in. I probably was just amusing myself with all the different locations. As for the food, I come from a family where we always ate dessert first to avoid the dilemma of being too full after a meal to enjoy it. So food is like a major pleasure which probably explains why it’s generally featured in my books along with that other major pleasure – sex.
5. People often say romance novels are escapism, but unlike the outdated stereotypes of the housewife reading them to escape a dull life, I find so many of my readers are workaholic career women like me. As such I loved the scenes in Hong Kong where both Kate and Dominic, who are both total workaholics, keep saying to each other “tonight we’re just going to have fun.” It’s like one night without being tied to the smartphone is a total wish-fulfillment fantasy unto itself, even before they get to any sex! Did you intend it that way?
CC: I think it’s a serendipitous conversation in which Dominic mentions “just having fun.” Both characters are operating within an environment of unknowns. Kate has preconceived notions of who and what Dominic Knight is. He’s reassuring her he has a human side. Not that he’s entirely sure he does, but he knows better than to say that and frighten her off when she’s – in his eyes – entirely naive. And I agree, the old stereotypes are long gone when it comes to escapist fiction.
6. I think my favorite line in the book is this one. “She enjoyed his startle reflex. It made him human.” Tell me about it.
CC: By necessity, Dominic has learned to control his feelings. He rarely exposes his thoughts; he’s disciplined and constrained. And on those rare occasions when he allows his mask to slip for a fraction of a second, his humanity is exposed.
7. Finally, it’s a trilogy. My own novels for Grand Central Publishing/Forever are a trilogy, too. Did you enjoy writing a longer, more complex story than can be told in a single book? And do you have any advice for dealing with readers who are desperately impatient for the next installment?
CC: I very much enjoyed the longer format. It made it possible to add considerably more complexity to the characters and plot. As for impatience, that’s a tough one since the publishing schedule is out of my hands. I’m busy working on book 3 at the moment so hopefully, soon, the last installment of Dominic and Kate’s story will be finished.