The wonderful guest of honor luncheon address was given at ICFA today by Nnedi Okorafor, the author of many books and the winner of many awards, including the World Fantasy Award, Carl Brandon Parallax Award, and others. She is Nigerian-American, is a graduated of the Clarion sf workshop, and got her PhD at U. of Illinois over 10 years ago–I missed the exact year in the introductions. The woman introducing Nnedi described her work as books which “blends magical fantasy and political realism.”
If you read my post earlier today about the Night Vale and creepypasta panel I went to, you know that the takeaway from it for me as a writer was the idea that the concept of the protagonist (or scholar ) as a passive observer who is untouched by events in a book (or by the subject being studied) is a highly colonial one, whereas both feminist and postcolonial modes of thought accept the necessity of both the subject and the environment being changed by their interaction.
Not too surprisingly (because synchronicity), this idea came up also in Nnedi Okorafor’s speech. What follows here is a partial transcript of her speech. I don’t actually type fast enough to get 100% — I can capture about 75%, and then I have edited this down to about 50% for clarity and relevance. Also, hey, if you want ALL the good stuff, you should be coming to the conference.
Everywhere you see words in square brackets [like this] it’s where I paraphrased something she said because I couldn’t type fast enough.
Excerpt from Nnedi Okorafor’s ICFA guest of honor speech:
I was in jail the night I became the first African American to win the World Fantasy Award.
I teach at Chicago State University, located on the South Side, the distressed area. You don’t have to walk far to get to the problematic sections. The crime that Chicago is known for is found very near the university. The university is a beacon of light in a dark area. Maybe I shouldn’t have used that problematic metaphor: “dark” and “light.” Many of my students are the first in their families to go to college. For me, growing up in a privileged upper-middle-class area, it’s [been eye-opening.]
One of my favorite students was Jermaine Reid, who grew up in one of the infamous projects. I remember when the Robert Taylor Homes were still standing. When I would drive past them I would roll up my windows and speed. The way Jermaine described life there reinforced the images I had in my head [of crime and gangs]. Unlike most of his age-mates, he had no police record. In his senior year he had been accepted into a masters program as a writer. He liked to debate gun control. He would take up my whole lunchtime with his persuasive arguments like the one that everyone in Chicago should carry a gun. Can you imagine that? His arguments were so well constructed that he had convinced the class and me that he was right!
He regularly went to the gun range and kept two guns in his home. He grew up in a place where reliance on the police [for protection] was laughable.
On the way home from the gun range one time he got into an altercation with an ex-friend. He was beaten bloody and not helped by a crowd who watched, nor by the police a few blocks away who refused to intervene. That’s the way it is in Chicago. Only after he tried to flee and was choked nearly to death did he take out his gun to resolve the conflict the only way he felt he could. The guy he shot was not killed and made a full recovery. But this was why Jermaine was in jail. And on the night of the World Fantasy Awards I was going to visit him. When I parked my car that evening I was terrified for Jermaine and for myself. I wasn’t thinking about any award ceremony, though I knew the awards ceremony was that night. I had assumed I hadn’t won.
[At the jail,] the waiting room was entirely black faces except for a few Latinos. We had to leave all our things in lockers outside and we were led into the room with the chairs and thick glass to separate us from the prisoners. They were led in, orange jumpsuits, jocular. What struck me most poignantly was that they were all young black men. Jermaine noticed me immediate and came over. He told me all about the gang inside he had allied himself with. Here was a [guy who had done everything right, stayed out of gangs, etc] had gotten his BA and was on his way to his masters and yet somehow the system had still gotten him. (She urges the crowd to read the book The New Jim Crow: Mass Incarceration in the Age of Colorblindness

by Michelle Alexander.)
There is nothing rehabilitative about the American jail system. It exists to destroy those inside. I was so angry, thinking that he would never be free of that system once it got its hands on him. I got back in my car [filled with anger and emotions] and turned on my phone and my phone went crazy, making bubble sounds, as text after text came in. The first one I read was from my editor Sharyn November and it was just two words: You Won.
I felt like my mind would break the way glass shatters when it is hit with hot and cold at the same time. All the conflicting emotions I felt became like the pressure that creates a diamond.
I began to imagine an American city, maybe 50 years from now. In the downtown area was a tower, like the Cook County jail that is so near the Sears Tower. It was full of genetically created people who did not know what freedom was because they had never been free. This story that brewed hotly in my mind began as a short story, evolved into a novella, and eventually became the novel The Book of Phoenix. (Read excerpt at Clarkesworld) This is how [my creative process works]. But a Nigerian man once warned me that you can’t write about something without it writing about you. 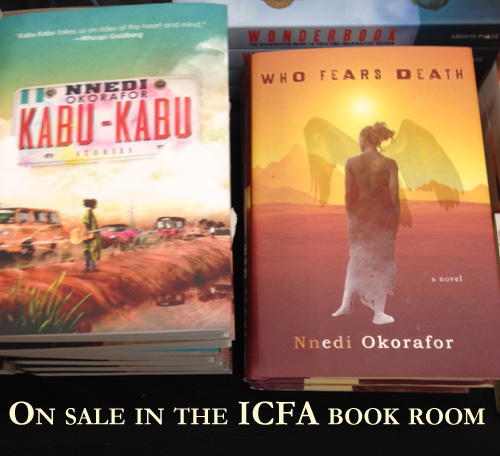 From last year (2013) I could tell you about things that you would think came right out of my novels, but they happened to me. I’m not kidding. I could tell you about the presence of Shango the Thunder God, prophecies that came true, and conversations I had with princes. There are things my stories call forth and there are consequences for my callings.
I am okay with this now. Now.
This semester when I asked my class what they thought of sf/fantasy, one said “fantasy is unrealistic fiction.” Another said “Science fiction was fiction that could never be true.” Oh man, so much work to do! (audience laughter) Another said “Fantasy is fiction where everything is made up.” This was all this semester! This would make me laugh if I weren’t so annoyed. Some fantasy may not be concerned with realism but mine sure is.
I had a very rosy, happy childhood. I went to a terribly racist school and had racist teachers and racist friends. My next door neighbor and I both loved insects and had a good time. At eight years old we had a fight over a donut. She got mad and called me a nigger. We never spoke again. The end.
But I had a very rosy, happy childhood. When I was 16 though, I got to Lagos and I was so terrified by the chaos around me that I was hiding scrunched down in the seat [of the car]. In my first 15 minutes in Lagos I had seen a dead body in an alley, my driver spat at 10 different people and cursed them “damn your mother!” When I wrote Lagoon

(Lagos is Portuguese for lagoon) I returned to all that [in my mind]. Lagos may be one of the largest cities in the world very soon, so it’s the perfect place for an alien invasion. [Hence the book.] I am due to return to Lagos soon and given that what we write about [comes true and life imitates art], maybe we should all be worried? (nervous laughter from the audience)
I will end on a thoughtful hopeful note, quoting from Ben Okri’s book Birds of Heaven, “It’s easy to forget how mighty stories are. They work with all the internal materials of mind and self… They become part of you and change you.”
Links:
Nnedi Okorafor’s website: https://www.nnedi.com (info on all her books is there)
ICFA Conference: https://iafa.highpoint.edu/annual-conference/
Birds of Heaven by Ben Okri: https://www.goodreads.com/book/show/301676.Birds_of_Heaven
The New Jim Crow by Michelle Alexander: https://www.goodreads.com/book/show/6792458-the-new-jim-crow