Just got this press release from NLA! Congrats to all these talented writers! Winners will be announced on May 1st!
SEMI-FINALISTS ANNOUNCED FOR 2015 NLA-I WRITING AWARDS
(Columbus, OH) — National Leather Association – International (NLA-I), a leading organization for activists in the pansexual SM/leather/fetish community, announced today the semi-finalists for its annual writing awards. Named after activists and writers Geoff Mains, John Preston, Pauline Reage, Cynthia Slater, and the groundbreaking organization Samois, they are awarded annually to recognize excellence in writing and publishing about Leather, SM, bondage and fetishes.
The semi-finalists for the Cynthia Slater Non-fiction Article Award are:
To All The Tops Afraid To Make A Move by Sinclair Sexsmith which appeared 2/25/14 on SugarButch.net
Kink Is About Connection by Race Bannon which appeared on 8/21/14 The Bay Area Reporter (ebar.com)
The Truth About Old Guard by Race Bannon which appeared 10/26/14 on Race’s blog (bannon.com)
The Handsomest Man In New York by Patrick Mulcahey which appeared 5/9/2014 on Leatherati.com
Of Pride and Gay Shaming by Patrick Mulcahey which appeared 6/25/2014 on Leatherati.com
Love Traditional Marriage by Patrick Mulcahey which appeared 10/18/2014 on Leatherati.com
The semi-finalists for the Geoff Mains Non-fiction Book Award are:
A Year of Dominance by Peter Masters (self-published)
Unequal by Design by Raven Caldera (Alfred Press)
As Kinky As You Wanna Be by Shanna Germain (Cleis Press)
The semi-finalists for the Pauline Reage Novel Award are:
Crave by Sierra Cartwright (Totally Bound Publishing)
Breaking Free by Cat Grant (Cat Grant Books)
Knowing Her Place by Kay Jaybee (Xcite Books)
Cub by Jeff Mann (Bear Bones Books)
Salvation by Jeff Mann (Bear Bones Books)
Rasputin’s Kiss by L.M. Somerton (Totally Bound Publishing)
Beyond The Compound by Claire Thompson (Romance Unbound Publishing)
I’ll Show You Mine by Lauren Gallagher (Samhain Publishing)
The Contract by Claire Thompson (Romance Unbound Publishing)
If It Drives by Aleksandr Voinov & L.A. Witt (Riptide Publishing)
The semi-finalists for the Samois Anthology Award are:
Big Book of Submission by Rachel Bussel (Cleis Press)
Big Book of Domination by D.L. King (Cleis Press)
First Annual BDSM Writer’s Conference Anthology by Dr. Charley Ferrer (Riverdale Avenue Books)
A Princess Bound by Kristina Wright (Cleis Press)
Twisted by Alison Tyler (Cleis Press)
The semi-finalists for the John Preston Short Story Award are:
Prison Bitch by David Wraith from the anthology Big Book of Domination ed. D.L. King (Cleis Press)
Grace Under Pressure by D.L. King from the anthology She Who Must Be Obeyed ed. D.L. King (Lethe Press)
My Pretty Pony by D.L. King from the anthology Bound for Trouble: BDSM Erotica for Women ed. Alison Tyler (Cleis Press)
Empty Seat by I.G. Frederick (Pussy Cat Press)
Switch by I.G. Frederick (Pussy Cat Press)
Mantrap by L.M. Somerton (Totally Bound Publishing)
You’re Fucking Mine by Sinclair Sexsmith (self-published)
The finalists will be announced May 1st. To find out more about NLA-I doing and to get updates on the Awards like the NLA-I Facebook page: https://www.facebook.com/National.Leather.Assocation.International or visit the website https://www.NLA-International.com
For more information about the awards, please contact the Award Committee Chair, CandiAnne, at awards@nla-international.com 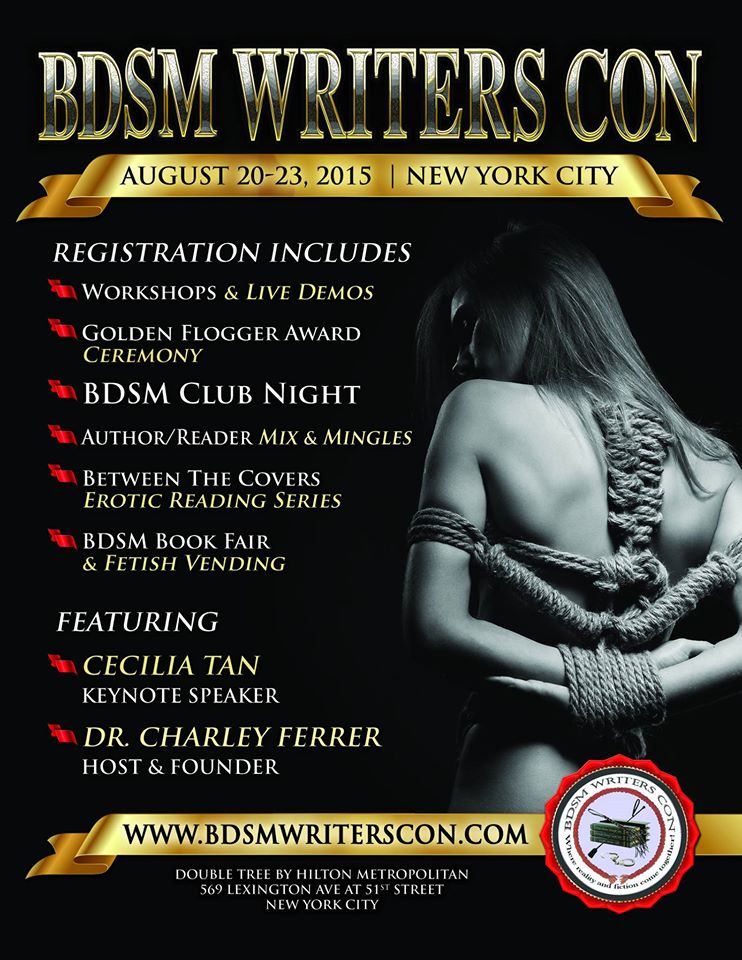