I haven’t had a spare minute to do a full write-up of this year’s Thanksgiving extravaganza that corwin and I put on, as usual, until now, that is! This post incorporates all the Instagram photos and links to various recipes I referred to online. (corwin’s recipes were mostly in books, I think.)
We always have a theme. Sometimes that theme is a cuisine (French, kaiseki). Other times it’s more conceptual, like the year we did the “Silk Road” so we could pull Far East, Middle East, and Mediterranean together, or the year Chanukah overlapped with Thanksgiving so we did each course as a different Festival of Lights (including Diwali and Yule).
This year we thought it would be fun to do something we’d never done before: AMERICAN. Here’s what the spoiler-free version of the menu looked like on our guest’s plates: 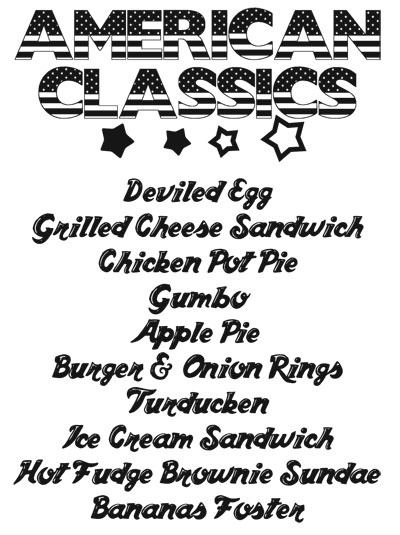 So the thing about the deviled egg is it’s a savory crisp meringue on the bottom, spread with kimchi mayonnaise (tastiest condiment corwin ever made), topped with ikura (salmon roe) and hot sauce pearls that are basically the same size, shape, and color as the salmon roe. We used Slap Ya Mama brand hot sauce and the Sphericator to make the pearls.
The crispy meringue was fun to experiment with and turns out its really quite easy. Like making meringue cookies except instead of adding sugar, you add finely grated cheese! I used basically this recipe: https://www.grouprecipes.com/43395/cheese-meringues.html

Having totally faked people out with the “devilied egg” we figured we’d double-fake by giving them a “grilled cheese sandwich” that was actually… just the world’s best grilled cheese sandwich. Two kinds of cheese (comte and one other, I can’t remember but they came from Formaggio) on corwin’s home baked rye bread, served with a tomato soup shooter and corwin also made his own duck bacon.
Also on the plate, homemade smoked tomato powder. Because there wasn’t enough umami on the plate already…

Of course because it’s Duck Day this was actually duck pot pie. I made and served it as empanadas. Although I referred to a couple of different chicken pot pie recipes I didn’t use any of them. I roasted a few duck legs on the bone, then cubed up the roasted meat. I sauteed cubed carrots and onions in duck fat with some poultry herbs (parsley, sage, thyme), made a medium-dark roux as a duck-stock gravy base, mixed it all together and added green peas. No potato, no parsnip, no mushroom (although I considered wild mushrooms).
The empanada dough recipes I looked up were all pretty similar to my preferred food processor pie crust recipe (from Joy of Cooking, Flaky Pastry Dough, which can be made kosher non-dairy by using shortening instead of butter), and I ended up following the nice step-by-step instructions found at Laylita’s Recipes: https://www.laylita.com/recipes/how-to-make-empanada-dough/, except I forgot to use the egg wash on the exterior (actually corwin put the tray into the oven and didn’t realize there was one more potential step), so they came out without the dark crusty appearance you see in some photos.
In fact they came out like this:


Served with a fried sage leaf, in a pool of bechamel sauce. They were so popular that the nine extra I had made were fought over. (Recipe made 25.) I used the Serious Eats bechamel recipe: https://www.seriouseats.com/2016/09/how-to-make-bechamel-sauce.html

The joke here is that corwin hates apple pie. He doesn’t like the flavor of apples in general and especially does not like them cooked in desserts. Most of our friends know this. As soon as we decided on “American Classics” as our theme I challenged him, “Now you have to come up with something that is ‘apple pie’ but that YOU will like.”
He hit upon the perfect thing during our anniversary dinner (our 26th anniversary was in November) where we were served a quince-pear-apple cider as a pairing, and he said, aha! Palate cleanser! So we served the cider with an apple pie spiced slush that we adapted from an Emeril Lagasse recipe for apple pie spiced granita. (Same recipe except instead of making it a granita we just put it in the ice cream maker and turned it into a sorbet-like texture: https://www.foodandwine.com/recipes/apple-pie-granita)


corwin deboned the birds and cooked them in the sous vide before assembling them for the final roasting step. He also made a savory cornbread that he turned into a traditional cajun-style dressing, and he also smoked duck legs to make the equivalent of “ham hocks” in order to make smoky greens for a side dish. Plus gravy. Everything came out fantastic.

All three of the desserts were served as one course, as each one was served as an ice cream bon bon. These were mostly my doing.
The ice cream sandwich was vanilla ice cream between tiny chocolate chip cookies. The biggest challenge here was making chocolate chip cookies small enough and thin yet structural. I read a lot of blogs and articles about how to vary the thickness, chewiness, and so on on chocolate chip cookies. I decided what I wanted was a very thin cookie that could be bitten through easily even if it was still frozen. I knew from previous experience that a thicker cookie, even if baked “soft and chewy” would be hard as a rock out of the freezer. I was also guided by the always on-point Smitten Kitchen, who did a post on cookie ice cream sandwiches: https://smittenkitchen.com/2006/07/good-enough-for-me/
The main secret to making very thin cookies was using Kerry Gold butter. It melts much more than regular butter. (And it’s delicious.)
The hot fudge brownie sundae was a deeply chocolatey ice cream (from the Ben & Jerry’s book), sitting atop a brownie base that I made by first baking brownies (using the recipe in Fannie Farmer, but with chocolate chips instead of nuts), then cutting the edges off and crumbling them up and balling them back together.
The freezing steps are slow. First you make the ice cream in the ice cream maker, and then pack it in a container and let it freeze overnight to be quite hard. The next day the temps were about 40 degrees out so I went and worked in our front porch to make the ice cream balls and stick them to the brownie bases, and then those all go back into the freezer for another day. The next day I made the chocolate coating by melting various chocolates together (some Callabaut, some others we had hanging around, mostly bittersweet). Then it’s about dipping each ice cream-brownie ball into the chocolate without leaving a hole in them or leaving ice cream and brownie crumbs in the chocolate. You have to do it quickly and then back into the freezer everything goes again.
I mostly used the techniques described in the Serious Eats Ice Cream Bon Bons recipe (https://www.seriouseats.com/recipes/2013/09/chocolate-ice-cream-bon-bon-recipe.html) except I had the added complication of the brownie piece. I got the idea to crumble the brownies from a Food & Wine recipe for Ice Cream Bon Bons (https://www.foodandwine.com/recipes/ice-cream-bonbons) although they leave their crumbs as a loose crust and I made mine into more of a cake ball (disc, really) and integrated it with the ice cream spheres in the second freezing step.
They came out fantastic and I am considering making a batch of these to have handy as small-size desserts just for our regular every-day eating purposes. Great way to have a small serving of ice cream!
When we served them we drizzled each chocolate bon bon with a little hot fudge from the Smitten Kitchen recipe. This was the one thing we didn’t make because as it turned out someone had given me a jar of it as a gift very recently, so we just used that. Smitten Kitchen really knows what’s what here: https://smittenkitchen.com/2009/02/hot-fudge-sauce/ (And thank you so much Kristina!)
Bananas Foster is a dessert we’ve served a few times at various dinner parties, including a previous Duck Day, but reformulating it into an ice cream bon bon was really fun.
First, the ice cream. I basically said to corwin “I want a brown sugar, brown butter ice cream with a touch of cinnamon.” He basically made a brown butter & cinnamon creme anglais (with brown instead of white sugar) and froze it in the ice cream maker. By itself this was extremely delicious.
I made slices of banana to serve as the base for each bon bon. A day after making the ice cream I scooped them into balls and froze them to the bananas. This proved to be trickier than the brownie both because the ice cream was softer in texture (even after freezing over night) and the bananas are slippery. But I eventually got them assembled and frozen.
The next day I made the white chocolate shell and the white chocolate just would not melt smooth. I think some of it had bloomed a bit and for whatever reason I could not get it to turn into a nice coating liquid. I’ve never had this problem before. Unfortunately it was the last step and I did it on Thursday when all the stores were closed and couldn’t start over with fresh ingredients and I also couldn’t risk burning it or seizing it. So I had to make it work.
In the end I used the petit four technique where you put them on a wire rack and pour the melted white chocolate over them. I figured it would be OK to have the banana exposed at the bottom. Because the texture never got completely smooth it wasn’t as pourable as I might have hoped, but it was good enough to get a kind of turtle-shell onto each bonbon. They didn’t look pretty, but they tasted great.