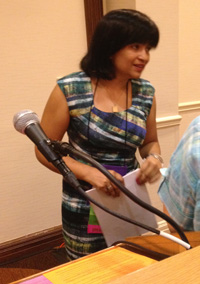 I hurried out of the room this morning to try to get to Nalini Singh’s workshop on Writing Paranormal Romance after hearing tales of how some other workshops were so full that there wasn’t even standing room: people were standing out in the hallway trying to hear them. (The one on “How to Write Faster” was one of them: glad I slept in a little bit instead of trying to get there only to be shut out. Fortunately all RWA members can download the handouts from that class and many others through the conference app! Win!) Funny how the threads tie together in life: two weeks ago I was on a panel at Readercon on recommending romances to sf/fantasy readers, and of course Nalini’s praises were sung. Now here I am at a romance convention and I get to hear the woman herself impart wisdom. I love my life, did I mention that?
First, a little note about diversity. Yes, this conference is notably “whiter” than a lot of the conferences I attend. Many of the science fiction conventions I go to have actively recruited writers of color as speakers and fans of color as attendees. It’s really noticeable to me to go somewhere now where the small percentage of people of color stick out like sore thumbs. I don’t know if that’s part of RWA demographics or the fact that we’re in San Antonio (where I’ve never been) or that the hotel convention rate was a whopping $229 a night and maybe that skews the attendees base toward the most privileged. All I can say is this con seems very white. So it was interesting that at Nalini Singh’s talk, I felt like there were more people of color in the audience. I counted: out of 62 attendees in the workshop, 12 were visibly women of color. (There were only 4 men in the room, all white.) That seemed like a higher percentage than in the general population here, and I wondered if that was because Nalini herself is a person of color, leading to a greater comfort level? Or because paranormal itself so often deals with themes of integrating the “other” or embracing the “other”? I can only speculate, but diversity and representation are issues that come up again and again in my activist work and in the fandom communities I am part of, so it’s on my mind.
But now to the actual subject of the workshop, Writing Paranormal Romance. Nalini is witty, fun, and smart, and I didn’t write down even half of what she said, so let me assure you if you think you can just read my blog instead of attending a conference like this one and still get all the good stuff: you’re wrong. Here’s a tiny fraction of the wisdom imparted: 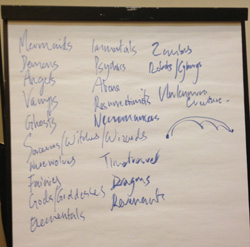 The workshop began with Nalini writing down a list of things and topics one finds in paranormal while the audience yelled out pretty much everything from Androids to Zombies. “You see, you have this massive canvas to work with,” she said. And by the way, “Vampires are always hot, even when they’re not.”
“Rumors of paranormal’s demise have been greatly exaggerated,” Nalini assured the eager audience. “When I sold the Psy-Changeling series, that’s what I was told, that paranormal was dead.” Now she’s 14 books into the series, with every one hitting the NY Times bestseller list in this “dead” genre. She went on to opine that perhaps some tropes or ideas get mined out, but the key is to come up with something unique, some element that makes your book or series stand out from the rest. What makes it different?
But you also can’t just sit down and plan out what’s different. You can’t just sit and try to cook up something based on unique marketing. The story needs to speak to you. “I don’t consciously think about it before I write. Find your point of difference by being passionate about what you write.” Then worry about fixing it up or tweaking the concepts later. “If you do something that has been done before, you have to do it in your own way. Find your own rhythm. Give the reader something that will make them feel it’s fresh and new.”

She covered some basics of worldbuilding (“Don’t throw the kitchen sink in it. Don’t just give a new power or throw a new creature in every time it’s convenient. That kills the tension.”) and keeping the world consistent (“Set rules, stick to the rules.” “Consistency is the number one thing readers rated as important in a paranormal.” –in an online poll she did).
Another important concept is a “story bible.” Keep track of all the characters (eye color, height, etc), the magical system, what can and can’t be done, etc. Nalini uses a private Wiki. Some writers use Evernote. (I use Scrivener.) Have a way to keep track even if it’s notes on paper in a folder. And remember that if it’s in your head and in your notes but NOT IN THE FINAL BOOK then it doesn’t count. Only what makes it to the page is the canon. (She didn’t use the word canon, but I will!)

(aka L.L. Raand) about working with overarching series plots and individual book plots and romances within the bigger arc. I can’t do the discussion that followed justice, but it included diagrams and the idea of with multiple books you have multiple crescendoes before the big finale. Each book is a building block. You have to know what the ultimate ending is going to be, though.
Which led to another audience question about how do you know when to quit? It seems like with some of the TV series (like LOST) where they didn’t know where it was going maybe what happened was once they had a hit on their hands they just tried to drag it out as long as possible. She cautioned against dragging things out too much. If you’re going to add a second arc where there wasn’t one before, make sure it’s as strong as the first arc. Think to yourself, “Am I going to be as proud of this?”
Also:
“The best paranormal romance is about ‘human’ emotions. They have to be human even if they’re not. Don’t get sidetracked by your characters’ powers.” What readers connect to is the human element in the characters, their pain, their emotional state, etc.
I feel so ready to write a paranormal series now! Good thing I’m writing one. (Yes, I am. More details soon!)