If you’ve heard any of the three of us [Midori, Laura Antoniou, Cecilia Tan] talk about collaborating on a “secret project”… this is it!

SILK THREADS is a book we wrote together and we self-published via Kickstarter in January 2019.
A new bookstore and ebook edition was published in December 2019 via Riverdale Avenue Books. Now available! 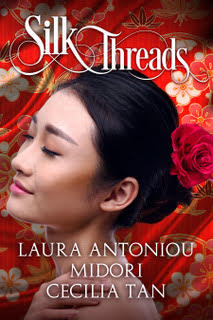 Download the individual novella of “The Bonds of Love” ebook from: Riverdale Ave | Amazon | B&N Nook | Kobo | Smashwords | and everywhere else ebooks are sold (Apple, etc)

Jiro‘s lineage once proudly served the nobility as samurai: protectors of royalty with a legacy of sword and rope. But though rich in tradition, in the modern age the family is penniless. And after cataclysmic events, Jiro has lost everything, including everyone he ever cared about and maybe even his mind. He is kept in a hospital amnesia ward, catatonic and unspeaking until a charity visit from the Crown Princess rouses him miraculously.

Ami is the sole heir of the Emperor, fresh out of Harvard and looking to both sow her wild oats and create real change for women in her role as a public figure. But her father and his head of security want her kept safe and sound: caged like a bird for her protection.
Ami will do anything to get out from under their control. Little does she know there are true dangers waiting for their chance to strike, a chance that comes when the princess slips away from her bodyguards and disappears in disguise into the underground world of sex clubs and rope bondage performers. Will the disguise be enough to keep her safe from the assassins on her trail? And what about this mysterious stranger, this Jiro, who seems fated to meet her again? What will she receive when she surrenders herself, bound and helpless, to his rope bondage: unbearable pleasure or ultimate pain? What Is Silk Threads?

Why did you originally self-publish it via Kickstarter?

We danced the dance with some of the biggest romance and erotica publishers in existence, but in the end we decided we’d do a better job of staying true to the book and to our readers if we did it ourselves. So we chose to launch the book through Kickstarter. 576 backers pledged over $30,000 to the project!
The huge support from backers allowed us to commission artwork including not only the book cover by Stephanie Inagaki, but interior illustrations by Michael Manning, Leen Isabel, Autumn Sacura/Alexandra Gladysh, and Tower015/Trevor S. After the Kickstarter was fulfilled, we made a deal with Riverdale Avenue Books to publish a bookstore edition.

How can I help?

The cover of the Kickstarter edition, with art by Stephanie Inagaki: