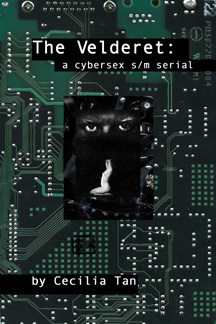 Roommates Kobi and Merin have a problem. They live in a carefree, utopian society where oppression and inequality have been eradicated, everyone has a say in the government, and everyone has plenty of food, clothing, and sex. The problem? Kobi and Merin harbor secret taboo desires, fantasizing about slavery and sexual domination.

“Tan, a widely published sf-erotica short story writer, now attempts to meld the genres in a novel. …her genre bending is, to say the least, stirring. … Tan does well at wedding futuristic fantasy and sex … [her] interesting exercise in alchemy manages to provoke the mind nearly as much as the body.”
— Booklist

“As with coitus-interruptus, a serial novel left unfinished can be a frustration, especially when it’s as hot and promising as was the SF-cum-S/M novel by Cecilia Tan, which made it halfway to completion a few years ago in the defunct magazine ‘Taste of Latex.’ … As behooves a serial, every chapter has its own searing scene. And, in a nice touch, not every character is a perfect sex machine. Tan’s fantasy has some welcome reality.”
— Lambda Book Report

“This fast-paced SM tale by renowned erotica writer Cecilia Tan transcends gender on many levels as it takes readers into an alternative world of SM…. What’s fascintaing about this novel is that it creates a futuristic universe complete with passion, love, kink, and homosexuality. Kobi and Merin not only create a world of SM play for themselves, but risk their lives to do so. This gripping, sexually charged novel will keep you turning pages to find out Kobi and Merin’s fate. There’s enough complexity, satire, and sexual exploration here to have you going back to reread it once you’re done. SM players will appreciate the sexual dynamics and difficulties Kobi and Merin encounter as they seek to make SM play a vital part of their lives. Bottom line: [a] one-handed sci-fi page turner.”
— On Our Backs

“Inventive and playful, Tan exhibits great imagination… [she] creates charming and believable scenarios for discovering and naming these desires for the first time. The Velderet is very well-thought out cybersex, with all kinds of gadgets and possibilities to find one’s pleasure. On a deeper level though, The Velderet is about the desire for deeply satisfying sex, and the mental and physical freedom required to experience it.”
–Penthouse Fetish