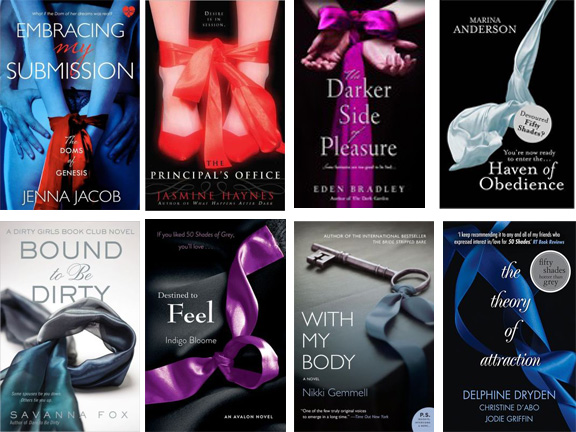 And I mentioned lots of covers have flowers on them as the single object of focus. Here’s a compilation of recent flower covers: 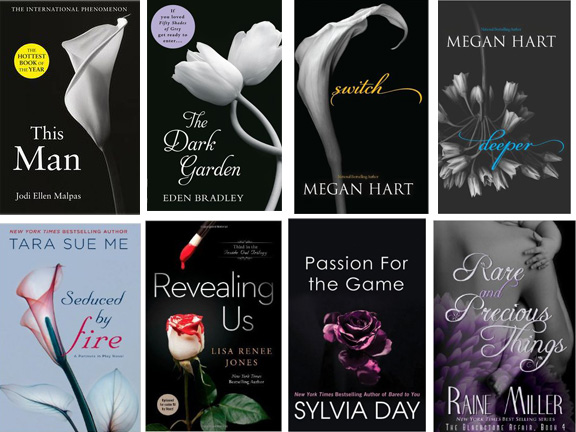 One point I feel I should make. I am not in any way complaining that these books look so similar. I think it’s rather brilliant, actually, that without any actual discussion taking place from one publisher’s art department to another, a consensus has emerged around what this genre “looks like.” Of course, now it perhaps is getting overdone, which is why it is evolving in various directions, yet still maintaining various signifiers. In the previous post I talked about the leap into jewelry and below I’ll get into some other trends that are appearing.
Someone did point me at one indie/self-pub book entitled Surrender that has both the commonly seen high-heeled shoe and a pearl necklace! But the pub date is March 29, 2013, two full months after Slow Surrender had its release, and I also note that it had two versions of the cover, one that was more in the style of the dark-with-one-color vein and one that was more “contemporary” romance looking.
And for fun here are two MORE covers with high heels on them:

One author whose covers consistently have been going AGAINST the trend, I think very intelligently so, is Maya Banks. Her publisher went the opposite way for her “Breathless” trilogy, using WHITE instead of black/gray/desaturated-blue:

And now they’re going all out with super-saturated colors for her latest series, but I note the series is called what? The “Surrender” trilogy. And the images are what? Flowers. So they’re staying firmly within the genre conventions and milieu, and yet giving them a really vibrant look: 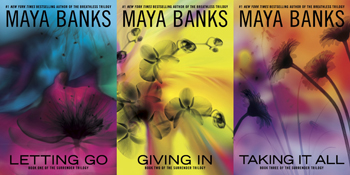 I haven’t read these yet, myself, but my impression from reading reviews is that the insides are as vibrant as the covers! Fitting.