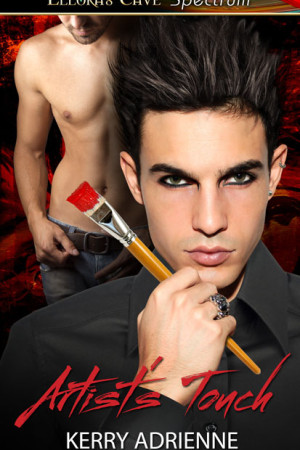 Kerry Adrienne: I love all the arts and dabble in most of them (except cake decorating, which I really, really hate). The idea of an artists’ guild in NYC (the best city in the world), filled with creative men, just hit me as a great place to lose my writing self in. I love the city, the brownstones of the upper west side, and the varying cultures and people of the area. Lots of things to spark stories, and I get to write about all different kinds of writers. Though only three books are contracted right now, I have a couple more ideas for the series.
Cecilia: What drew you to Kenon as a protagonist?
Kerry: I love a good-looking jerk who is hiding behind his jerkiness. I love unmasking a flawed character.
Cecilia: Would you say you tend to identify more with your main characters, or with their love interests?
Kerry: That is an interesting question. Most every book I’ve written, I’ve considered both partners to be the main characters. I try to give them equal “screen time” and make sure they both grow in the book. I don’t think of one character as the main character. Dominant in the relationship, maybe, but not a “main character” as opposed to the other character.
Cecilia: You’ve covered so many milieus in your romances, Roman senators, Greek playwrights, druids, guitar players, painters… do you do a lot of research for your books, and is there a time or place you’re really looking forward to researching in the future?
Kerry: (laughs) I love history and the arts. I have a minor in Classical Studies, so that’s why I love that particular time in history, but you can bet that I researched everything again–I didn’t rely on my faint memory from college. In truth, I love reading history of just about any era. The problem with the research is that I find it so fun that it becomes a total distraction and the day is gone with zero writing. I have to be careful. When I was researching the time period for the brownstones in Artist’s Touch, I lost several hours looking at renovations that had been done and looking at brownstones on the market currently. *hangs head* I have no self-control when it comes to research.
Cecilia: You edit as well as write. How has working with other writers’ stories affected or helped your own writing?
Kerry: On good days, editing makes me feel like part of a big beautiful world of words and writers with a common goal. On bad days, it makes me feel like I suck the worst. *laughs*
I also teach writing at the college level, so I am pretty neck-deep in writers most of the time–and I wouldn’t trade it for the world. 99.999% of the authors I have worked with have been the kindest, nicest people you could ever expect to work with. Most people cannot say that about their jobs. It keeps me optimistic. It helps my own writing by uplifting me that we’re all out there working hard together.
Cecilia: What’s your writing time like? Do you have a regular routine? how do you balance it with the other demands of being a writer, editor, mom, et cetera?
Kerry: To be honest, it is a challenge, and I am still seeking balance. I’ve realized that I am a workaholic. I am not happy if I am not busy–so I try to make a schedule. I need to tend my kids (I also homeschool my youngest), and I have other hobbies (guitar, painting, costuming, etc…) that I need to do–or I get ornery. I’m constantly reassessing my schedule and trying to tweak and hone. I do get a lot done, but it never seems to be enough.

Cecilia:And you travel a lot, too! Where are you going to be this year?
Kerry: I’ll be at several  conventions this year:
Fated Desires Retreat (Chicago) in April
RT Booklovers (NOLA) in May
BEA (NYC) in May
Authors After Dark (Charlotte) in August
Romanticon (Ohio) in October

Every starlet wants master painter Kenon Alavi to do her portrait…and more. But Kenon prefers firm to soft and sates his desires with the boyfriends of the women he paints, enjoying the diversity of many lovers but shunning any attachments. Wallace Harte’s English degree isn’t helping him and working at a bar is the closest he’s gotten to being the Second Coming of Faulkner. Something’s gotta give soon, or he’ll be out on the street.
Kenon zeroes in on the bartender at an art exhibition, intending to add him to his long list of conquests, but Wally bolts, initiating a heated game of cat and mouse. Kenon delights in the game until he discovers what Wally is writing. Feeling betrayed, Kenon swears off all entanglements until he reads Wally’s story and discovers true love is sometimes between the pages and not the sheets.
Inside Scoop: This book contains hot, sexy scenes of M/M interaction of an artistic nature. Who knew having your portrait painted could be so hot?

Kerry writes about love in its many forms, and enjoys exploring the dynamics of relationships and the quandaries people get themselves into. She lives in suburbia, but is making plans to escape to the ocean and NYC, as both places hold a piece of her heart.
Find Kerry: Blog | Facebook | Twitter | Goodreads | Pinterest