Next month my trilogy comes to an end with the release of SLOW SATISFACTION. That’s right, the series that began with Slow Surrender, the Struck by Lightning trilogy, will deliver a final, mouthwatering, knee-weakening installment! 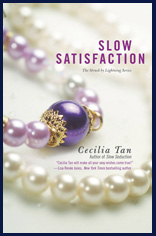 As you know, I like to give the gift of bonus sex scenes to those who help me spread the word about my work. This time, instead of asking people to just retweet or link separately, all willy nilly, please take part in a simultaneous mass release (orgiastic, even!) called a Thunderclap! It’s easy: you just sign up your social media platforms (Twitter, Facebook, or Tumblr) and instead of you sending the message at the time you sign up, it sends all on the big day of the book’s launch.
But there’s a catch. The catch is that if I don’t get 100 people doing it, the Thunderclap won’t launch. It’s like a Kickstarter, except instead of asking for money, I just need you to join in spreading the word. Click here to help: https://thndr.it/1r8tF6X
On August 26th when the campaign goes ka-boom! I’ll send around a special bonus outtake scene between James and Karina!