Many people have asked me who I would cast in a dream movie version of the Struck by Lightning trilogy. When Slow Surrender first came out I had posted the following:

Well, my basis for my male main character is a young David Bowie, but he’s too old to play this role now by far! A contemporary actor who could pull it off… maybe Cilian Murphy if you lightened his hair?

The female main character, Karina, who narrates the story, is a little trickier. I don’t describe her in great detail since the book is from her point of view and I want the reader to be able to see herself in Karina’s shoes. I picture her as a small woman. A good fit would be Nora Zehetner (she played Eden on Heroes and Dr. Reed Adamson on Grey’s Anatomy).
Now that the final book in the trilogy is coming out (Slow Satisfaction) I figured it was time to put my Google-Fu to some use and look for more possible images.

Several readers have told me that in their minds, they’ve already cast Benedict Cumberbatch as James. He’s a versatile actor and I’m 100% sure he would excel in the role! I went hunting for an appropriate image.
The other actor I mentioned above is Cilian Murphy, who I just learned from Wikipedia was in a rock band before he turned to acting! 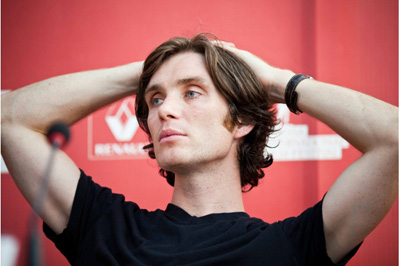 You know who I think could pull off Karina’s cheeky personality really well, though? How about the now twenty-something Emma Watson?


Hm, especially since Emma is often seen in slightly kinky fashions, like the ankle chain high heels she was photographed wearing in New York City in 2012, in chain mail for the cover of Vogue, a barely-there black lace number, or the heavy chain necklace she wore in Marie Claire. She’s also been known to sport a key-shaped necklace. Whose collar (or heart) do you suppose it unlocks? A few readers have told me that in their minds they’ve cast Benedict Cumberbatch as James. Something tells me Mr. Cumberbatch would have a lot of fun with the role. There’s probably no part he can’t play, though! Quite a talented man, Mr. Cumberbatch.

Okay, but what about the supporting characters? 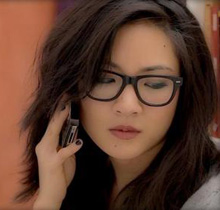 For Becky, Karina’s roommate, I’d cast Constance Wu, an actress i discovered in the web series Eastsiders by Kit Williamson. (It’s a fab gay web series, watch it online here: Episode 1. Kit, the writer and one of the main actors in it is now on Mad Men.) Constance has also been in Torchwood, CSI, and various other shows and movies. 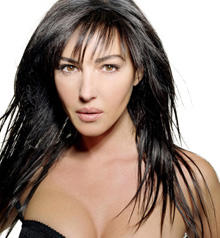 Harder to cast is Ferrara Huntington, the former starlet turned media-mogul’s wife, who is the antagonist in this story. Really, Ferrara is like everyone else in the story: looking for love. But she’s looking in the wrong places. I cast Monica Bellucci here, but I think there are many actresses between age 35 and 40 who could pull off the slightly menacing sensuality that Ferrara exudes.
What about you? Who would you cast if you were directing a movie of the Struck by Lightning books?