First time in paperback! I’m so excited to bring you the brand new cover design for SPELLBINDING, the anthology of stories set in my Magic University universe, some written by me, many written by other authors and fanfic writers whom I invited to come play in my sandbox. The stories are very erotic and very magical, covering a wide range of characters and sexualities!
And it was your votes that determined who will be on the cover of not only this book but the fourth and final novel in the series, as well! You voted for Master Brandish to appear on the cover of The Poet and the Prophecy, which will wrap up the series in September, and the second place vote, for Damiana Pendragon, we decided to put on the anthology!
Art and giveaway under the cut!
Of course if you wish to pre-order the anthology, you can do so at Amazon or Smashwords.
To celebrate the new cover and the upcoming release of the anthology on July 9th, the following blogs are participating in today’s cover reveal! Each one has a separate tasty excerpt of hot fiction from the anthology!
So drop in and visit them:

You can also enter to win one of 5 advance reading copies of Spellbinding I’ll be giving away! If you’re in the US or Canada you have a choice of paperback or ebook, and if you’re outside the US/Canada it’ll be ebook. Enter through the Rafflecopter giveaway below.
And keep scrolling down to see the gorgeous new art by Fox Estacado!
a Rafflecopter giveaway 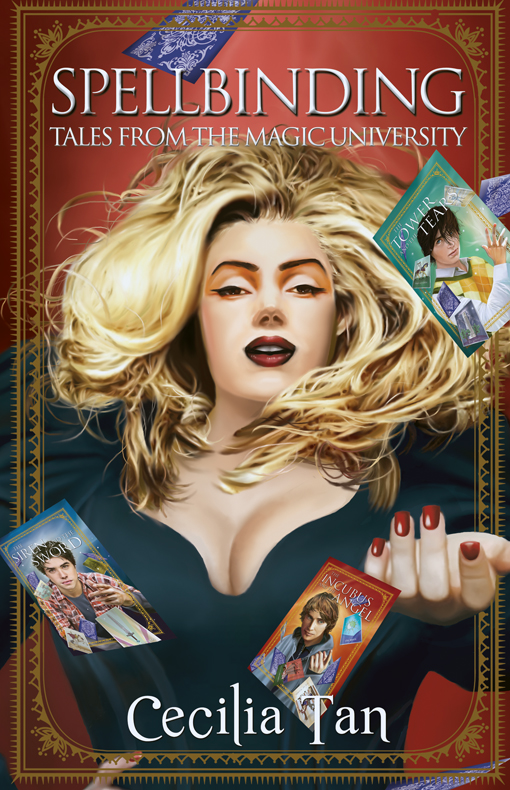 EXCERPT #1 from “Ignorance is Bliss” by Cecilia Tan, a story about Frost
Michael and I met in Enchantment class. We were lab partners; is that a cliche? How do most people meet their first boyfriend?
I suppose most people have already met their first boyfriend by the time they are in college. But remember, I was raised by wolves. At first, anyway. I’d actually spent my teen years living with two nice old ladies who were happy to foster a magical foundling, just a few blocks from the campus of Veritas. From no protection at all to overprotected, in other words. Neither one is conducive to dating.
Michael and I were both wide-eyed and quiet as church mice that first semester, though perhaps part of that was no one wanted to upset Professor Cross. She was a brute when it came to practice and homework and grading on a curve. Fail her class and you could forget being an enchanter.
“Put your hand in mine,” Michael said in a quiet, quiet voice. We were sitting facing each other, working on an exercise from the syllabus. Around us everyone was paired off and doing the same thing, while Cross stalked up and down, looking for mistakes or lack of focus. He held up a hand, his palm open.
I hesitated for a moment. Physical contact wasn’t something I’d had much of in years. It wasn’t something I’d ever remembered wanting, and since moving to Cambridge, it had never been forced on me.
This wasn’t forced, though. It was an exercise for a class. Michael’s eyes were large and round and expectant.
I put my hand in his.
It was all downhill from there.
(to read part 2 continue to SexyRomanceNovels!)