So, a couple years back at a Circlet writers and editors retreat, which I host annually at my house, one of the writers in attendance wrote the start of a humorous and sexy story playing on the fantasy of what people imagine in their wildest dreams it must be like working at an erotica publishing house. During one of the writing exercises he wrote the start of it and read it aloud to much laughter. That night he finished the story and brought it back so we could hear the whole thing.
That was also the day we did brainstorming on anthology themes for the coming year. And thus was the anthology LIKE A CIRCLET EDITOR born.
The book will be out shortly, and you can pre-order it now! But I’m pleased to be part of the cover reveal! See below! Also see below for entry to a rafflecopter giveaway…and for an enticing and sexy excerpt from the very story that I spoke of above!

“The Intern”
by D. Mark Alderton
She showed up at the Circlet estate eager for the job. Working on a graduate degree in the publishing field, a chance to intern at Circlet Press was an exciting opportunity to work with the top writers and editors in erotic science fiction and fantasy. She hoped they deemed her worthy of the position.
Pressing the button to the side of the massive oaken doors, she heard a gong resound deep within the recesses of the house, although the word “house” hardly did justice to the medieval manor. Within moments one of the doors swung wide, and a tall woman in a smart leather outfit bid her enter. Her long, ebony hair was pulled back in a sort of pony tail that cascaded down the ties of her outfit. Her severe look was belied by her smile and gracious manner.
“Welcome to Circlet Press,” she said. “I am Mrs. Stanford, and I’ll be conducting the orientation. And you are…?”
“Susan,” said the grad student, “Susan Chambers.”
“Ah, that will be confusing,” replied Mrs. Stanford. “Most of our interns are named Jennifer. I hope you don’t mind if, for convenience sake, we call you that.”
“I suppose that’s okay,” replied Susan/Jennifer, not wanting to blow the opportunity before it even began.
“Very good then. Let me show you around Circlet. You know, of course, we are the premiere purveyors of science fiction and fantasy erotica, specializing in alternative sexualities. So long as it is loving and consensual among adults there’s little that we won’t explore.”
“Yes, indeed. It’s why I was eager to get a position here.”
Mrs. Stanford gave a look through slitted eyes and then nodded. She led the young woman down a hallway lit by elaborate sconces and took her into what seemed like a massive bedroom. “This is the office of our publisher and editor-in-chief and thus the nerve center of Circlet Press. Let me see if she’s in.”
Dimly, through the darkened room, Susan/Jennifer could make out a large canopied bed with what seemed to be a trapeze hanging from the top. She could hear several voices, one of whom was clearly in command, “Both of you kneel before me and pleasure me with your tongues. Take turns if you have to, but punishment will be severe if I’m kept waiting. I haven’t come in more than an hour and I have no more time to waste.”
The grad student felt a hand at her back. It was Mrs. Stanford. “She’s in conference right now.”
(To read the next segment of this story check which blog is hosting it from the Cover Reveal main page on Circlet.com!)
a Rafflecopter giveaway 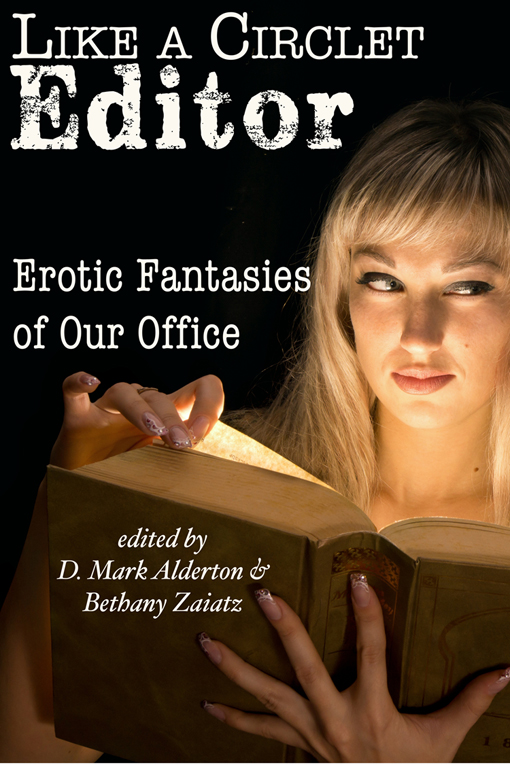