THE PRINCE’S BOY tells the story of young lovers Kenet and Jorin and their fight to save their kingdom from evil and their love from destruction. In this world “night magic” is a powerful form of sorcery powered by the lust of male for male. The Prince’s Boy was originally serialized from July 2009-June 2011 on circlet.com and Livejournal and was awarded Honorable Mention in both the Rainbow Awards and the NLA: International Writing Awards for BDSM-positive fiction.
I’ll be revealing new cover(s) in July, a new box set ebook will go on sale in November. (Hopefully with a new bonus story included…? I’m working on that!)
Reminder what the old covers looked like: 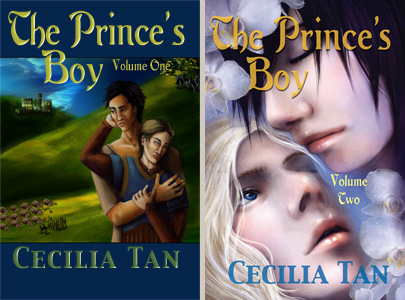