I went down a bit of a rabbit hole yesterday when I dug into — don’t laugh — my archive of grad school poetry. Well, okay, laugh. I was so chipper and naive and the poems are so earnest and trying so hard. They’re better than my junior high poetry but only in certain light. Some of them are actually good. Or they would be if they had been able to live and breathe within a matrix of expectations on equal footing with the literary canon.
My whole Twitter epiphany was graciously collected by Charles A. Tan (no relation) on Storify:

The gist of the thread is this: my grad school poetry professor couldn’t see that there was a contradiction for those of us who weren’t white, straight males when told that we had to write “universal” themes in our poems that could be understood implicitly without having to be “explained”. In his view, if someone couldn’t understand your implicit message it was because it was a bad poem, and if you had to make it too explicit that was also a bad poem. By extension the messages that could be received most implicitly were “literary” ones. In other words, if it was about a white man’s alienation after an act of war (for example), the reader should “get” that even if war was never mentioned explicitly in the poem. The problem is that if the implicit message is something that is “universal” within a marginalized community–for example, internalized homophobia–those who have never experienced it won’t “get” it. And rather than admit that there are things outside their experience, the literary establishment instead brands those topics as marginal, and only lauds their appearance when they make themselves accessible to the literary mainstream.
Short version: “literary” is a worldview that centers academia, particularly white male upper middle class academia. At the time I just didn’t have the perspective to see that. “Literary” equals “laudable” in MFA programs. It’s a self-reinforcing system.
I quit writing poetry because for me to perform the same artistry would require my poems to exist in a context where the implicit things that didn’t have to be “explained” were things like internalized homophobia, questioning cultural identity, and code switching. And that context didn’t seem to exist. My poems were “meaningless” to the literary establishment, and I had plenty of things to write instead, in other contexts. (Come to think of it, founding the English language’s only erotic science fiction publishing house in 1992 was me creating my own context for my fiction.) 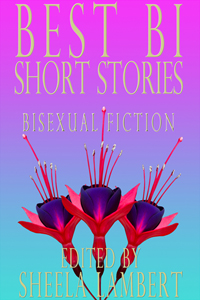 This introspection was all brought on by the fact that Sheela Lambert of the Bi Writers Association — the editor of Best Bisexual Short Stories (Circlet, Amazon) and the driving force behind the Bi Book Awards — is editing a book of “bisexual poetry.” (Call for submissions here.) I’m bisexual and I figured I would look and see if there was anything obviously “bisexual” about my poetry from back in the days when I wrote poetry. If. Ha. “If.”
In fact, lo, I went back and saw that a ton of my angsty metaphor-laden poems from the early 1990s are now, in retrospect, quite obviously about internalized homophobia and/or about being caught between communities, even if not a single person in my poetry workshops (including me, sometimes) could articulate that. But I wonder if these poems will read “properly” if they were to be published in a book with a bisexual or queer context? I guess I will submit them and see.