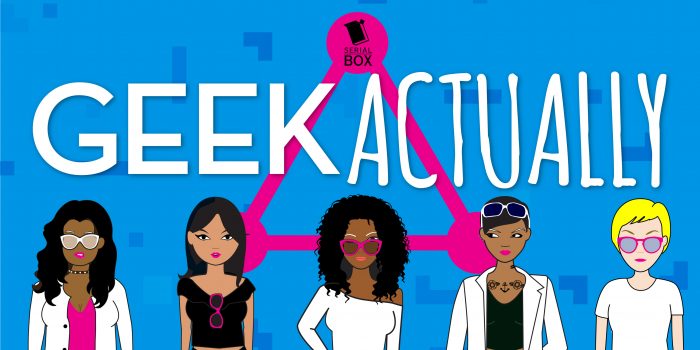 I’m so excited that a project I’ve been working on for almost a year is having its debut next week!
Geek Actually is a fiction serial I’ve co-written with Cathy Yardley, Melissa Blue, and Rachel Stuhler for Serial Box Publishing. The official tagline is:

It’ll be in text and in audio formats! The first episode (titled WTF) premieres June 7, 2017, with a new installment every Wednesday until the season finale on August 30. Episodes can be purchased individually at any time for $1.99, but Season Passes at Serial Box allow readers to pay for an entire serial upfront at a discount – $19.99 includes all 13 episodes in both text and audio (about $1.53 per episode).
You can read it via the Serial Box app on iOS or Android or subscribe through their website here. Or the individual episodes can be pre-ordered/purchased from:
Serial Box • Amazon • Barnes & Noble • Apple iTunes • and other usual places ebooks and audiobooks are sold!