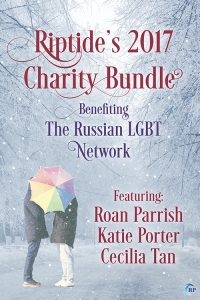 Just got the news that WATCH POINT is up for pre-order! This gay Navy SEAL abduction romance can be bought singly or as part of Riptide Publishing’s 2017 Charity Bundle to benefit the Russian LGBT Network.
The bundle also contains Roan Parrish’s The Remaking of Corbin Wale, and Katie Porter’s Came Upon a Midnight Clear. 20% of all proceeds, whether you buy the bundle or the individual books, goes to the charity.
WATCH POINT is by far the most trope-tastic thing I’ve ever done, a Christmas-themed, Navy SEAL, billionaire, abduction romance. It all fits together perfectly, though. Oh, and did I mention erotic? Of course it’s erotic–it’s me who wrote it, after all. It’s one of the few “Christmas romances” I’ve seen that carries warnings for dubious consent and heavy kink. (Description at the bottom of the post.)

Each year, Riptide Publishing releases a holiday collection in support of an LGBTQ charity. Twenty percent of the proceeds from this year’s collection will be donated to the Russian LGBT Network.
The Russian LGBT network was founded in April 2006. It is an interregional, non-governmental human rights organization that promotes equal rights and respect for human dignity, regardless of sexual orientation and gender identity. They unite and develop regional initiatives, advocacy groups (at both national and international levels), and provide social and legal services.
To learn more about the charity or to donate directly, please visit their website: https://lgbtnet.org/en.
Cover reveal coming soon! Plus a small blog tour at the beginning of November. The official launch date for WATCH POINT is November 6. 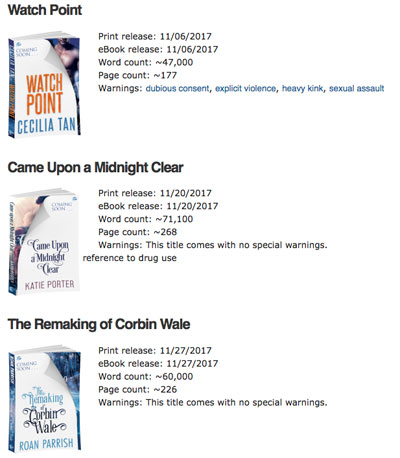 Eric Sakai-Johnson joined the Navy SEALs to protect his country and the people he loves. After discharge, he finds himself relegated to protecting big pharma billionaire Aiden Milford from assassination attempts and kidnapping. Until Aiden reneges on a promise, fires Eric, and lets Eric’s mother die with millions of dollars in medical debt.
Now Eric is the kidnapper. Snatching Aiden’s twenty-two-year-old son, Chase, for a multi-million-dollar ransom is the only way to get justice. It’s time for Aiden to learn what it’s like when someone you love is at the mercy of forces beyond your control. Eric has it all planned out. The one thing he didn’t plan for is the intense erotic spark between him and Chase.
Chase has been chafing under his father’s autocratic control. A gay hookup app has been his only ticket to rebellion—to clandestine moments of freedom, excitement, and danger. Now it’s his ticket to a deep connection and amazing sex with his “captor.” On the rocky island where they’re sequestered, Chase finds Eric to be everything he wants in a man: quiet, strong, capable, and honorable . . . until he finds out he’s been captured for real.