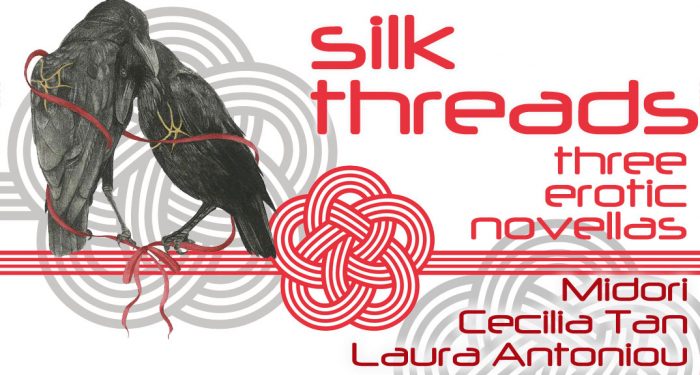 Folks, it’s the last day of the SILK THREADS Kickstarter and it’s been such a whirlwind that I am only getting around to making this post now. The first draft I made was on the first day, but things have been changing so fast and growing so quickly, every time I came here to edit it, it was already out of date!
SILK THREADS is a book of three erotic, romantic novellas, all set in Japan, and written by me, Laura Antoniou, and Midori. Laura wrote a section in a samurai-era past, Midori wrote a paranormal present, and I wrote a cyberpunk future, all tied together with a magical silk element that runs through all the stories LIKE A COMMON THREAD ha ha ha (now you know what we called it “silk threads”). Each novella is a romance between a different couple, and there’s rope bondage and shape-shifting tengu and lots of passionate sex and women seizing their sexual agency and pleasure. Because that’s what we do!
We launched the campaign on Friday, October 12th, and it funded ($7,600) before 24 hours had gone by, and within 5 days had surpassed all our stretch goals ($15,000). So we made new ones. If we reached $25,000, we’d add 9 pieces of interior art and also send a set of custom chopsticks to every backer. We hit $25,000 on November 7 and the number has just continued to climb. We passed 500 backers yesterday and topped $30,000.
So now’s your chance to jump in, too! Want to know more? Watch our quick and entertaining video:

Why are you self-publishing this?

Now, some backstory. We didn’t intend to self-publish this at all. The idea first came up in 2010. We were at a BDSM convention hanging out together and I brought up the idea that my literary agent had told me that Harlequin was looking for anthologies of erotic novellas for the Spice imprint. Three novellas by three authors was very hot at the time. “Diversity” was also getting sought, so non-Western settings, non-white characters. Excellent! And it was when ebook erotica in particular was starting to explode with BDSM and kink topics. My agent’s words were “I think the world is ready for something like this.”
Well, here we are EIGHT YEARS LATER, and you know the world has changed drastically in that period of time. In 2010 can you remember 50 Shades of Grey had not yet sold 150 million copies in the English language? And Obama was still in his first term as president? Since that time the Spice line of Harlequin has been dissolved and Harlequin itself has been bought by HarperCollins. The manuscript made the rounds of every publisher. Some wanted the diversity but not the bondage, some wanted the bondage but didn’t like the paranormal fantasy aspects, etc. etc. Nobody wanted the whole package and in the end it came back to us with nothing but low-ball “we could take a chance on this for no advance” or such a low advance that we may as well publish it ourselves. One publisher offered $2,000 to be split among us. That would be $666 each! You can see why we opted for Kickstarter with offers like that!
And readers have come through in droves. Over 500 backers have pledged over $30,000. Half of that money will end up going to fulfillment costs of the rewards, printing, shipping, and the processing fees, but the other half we’ll keep. And it will be reader support that made the eight years of effort all worthwhile.
In thanks, every backer is receiving a pair of custom-printed chopsticks, a red silk bracelet, and a postcard set of the art.
If you want to see a bunch of the gorgeous art we’ve already received to put in the book, lots has been posted as Updates to the Kickstarter campaign, as well as on our social media like Midori’s instagram, my instagram, Laura’s Facebook, and more.


The campaign closes at 9pm eastern time on Tuesday, November 13th (which is later today, I’m posting this at 4 in the morning…). So jump in now if you’re going to! And thank you to everyone who has supported so far! Please keep sharing the campaign link: