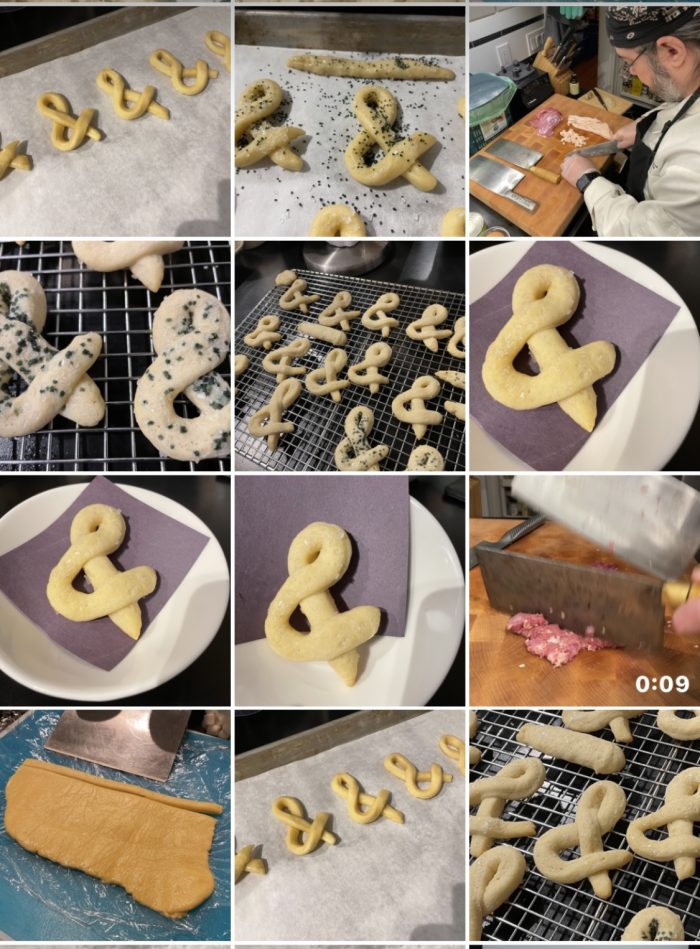 Apparently, I never got around to posting last year’s Duck Day compilation of photos and recipes…? So I’m quickly trying to put it together now before I post the 2022 ones…!

Since there was no Duck Day in 2020 because of the pandemic, we decided our theme for 2021 would be “Togetherness” expressed as menu items that included an Ampersand (&). But it being us, some things were not as simple as their names might imply:

Here’s the full menu as presented to the guests, though they were encouraged if the preferred to be surprised to read it later (and most of them did that):

Here’s the linkspam on the recipes used to create all of the above, and their descriptions and tips:

The basic recipe for the Bourbon Flip from Jiggers N Drams:
https://www.jiggersndrams.com/bourbon-flip/
(the variation with just the egg white, not the whole egg)

but instead of grating nutmeg on top, I candied bacon and grated that.

And instead of just bourbon, I used a duck-bacon fat washed bourbon, a la Don Lee’s Benton’s Old Fashioned, which introduced the world to the baconized bourbon concept:
https://punchdrink.com/recipes/bentons-bacon-infused-bourbon/

To get the fat rendered out of the duck bacon, I made candied duck bacon by starting with the smoked duck ends we can sometimes get from one of our local restaurant suppliers. You basically coat the thick-cut bacon in brown sugar and bake it until it caramelizes onto the meat, while the fat drips into the pan below.

Here’s a candied bacon recipe that uses regular thin cut bacon, but most of the recipes out there I saw called for thick or the bacon will burn before the sugar gets all the way to caramel.
https://www.simplyrecipes.com/recipes/how_to_make_candied_bacon/

If I did this again, I would halve the maple syrup.

Heavy grate on the bacon is OK.

Sooooo many recipes for how to make your own herb butter or honey butter at home start with pre-made butter?? Where’s the fun in that?

Here’s the technique I used for making both the honey butter and the herb butter for the most part, but I skipped the “washing” stage. I just squeezed the balls of butter in my hands to squeeze out as much buttermilk as I could and then blended in the honey and/or pre-chopped herbs.

One pint container of nice local dairy cream makes enough butter to fill two medium ramekins. For the honey butter I only made one cup’s worth of cream into butter and it filled two small ramekins we had.

Hubei Style “Pearl” Meatballs
from Chinese Cooking Demystified (one of our fave YouTube channels/Patreons)
Written recipe:
https://www.reddit.com/r/Cooking/comments/68lazd/recipe_how_to_make_authentic_hubeistyle_chinese/
(we subbed in two duck breasts, separated the meat from the skin & fat)

Ampersand cookies:
I followed this recipe from TasteMade for “homemade pocky” but I cut the salt in half, and swapped in almond for vanilla extract and doubled the amount, rolled the dough out as a 1/4 to 1/2 inch thick sheet and used the dough scraper to cut into strips, then folded/twisted the strips into the ampersand shape.

(The Food52 recipe says either/or on almond or vanilla extract)

It helped that I had this on hand already:
https://www.momococoa.com/shop/momo-baking-cocoa-original-dark-classic

I used this basic recipe:
https://tasty.co/recipe/homemade-oreos

What I found was that the salt crystals didn’t ever dissolve in this dough, though, so next time I might just try starting with salted butter and leave the salt out of the recipe? (I think salted butter is going to be the way to go.)

Inspired by the look of the pattern on the homemade oreos here:
https://www.sugarhero.com/gourmet-homemade-oreos/
I used the meat cleaver to give them a nice texture, no special cookie stamp needed. I just had to keep the cookie dough cool/cold and spritz the cleaver with spray oil once in a while.

Actually, at first I was cutting the cookies and then stamping them, but toward the end I discovered it would have been faster probably to stamp he pattern across the entire piece of rolled out dough and then cut the circle out of it. 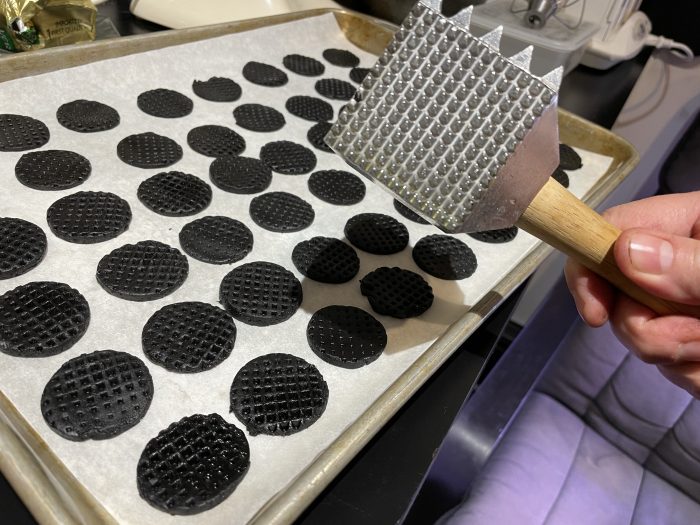 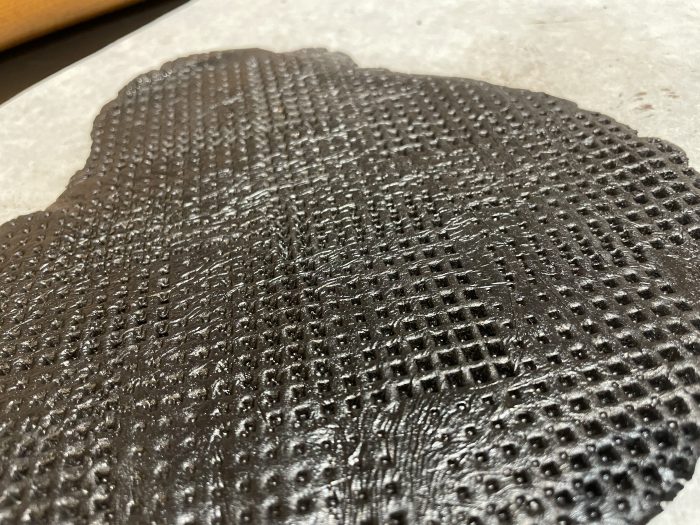 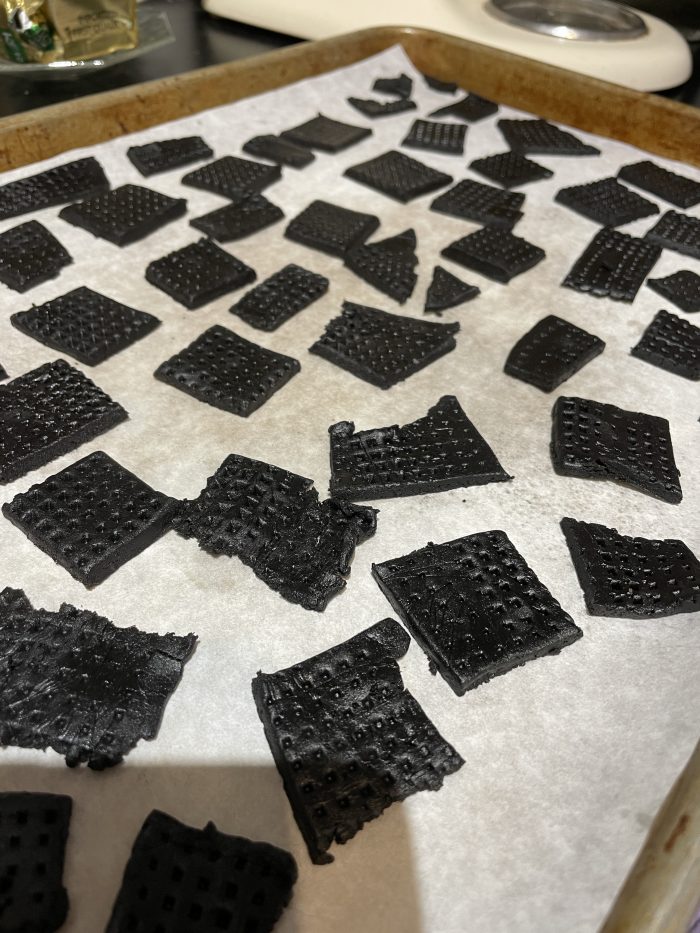 I did not use the Brave Tart recipe, which uses Golden Syrup and I don’t think it was missed in any way.

Also I halved the recipe and it still made so many that I still have 1.5 cups of cookie crumbs left as well as almost 40 round cookie halves. (Update: one year later is still have cookie crumbs left even though we’ve been topping ice cream with them all summer.) A few nights later decided to try to use the cookies up by making actual sandwich cookies out of them and they came out fantastic. (The white filling is mostly powdered sugar and butter.)

I’ve tried and failed to make these “fruit jelly” candies before: I used a korean plum juice one time that did not remotely gel or firm up even after I’d added triple pectic, gelatin, and agar agar to the SAME mix. Eventually we decided there must be some anti-coagulating property to plums or to that formulation (the label was in korean so it was difficult to be sure).

This time I decided to try using the Boiron fruit purees, which most of the pastry chefs online swear is the only foolproof way to make pate de fruit, and each fruit puree has a separate master formula of how much pectin, acid, and sugar to add so that it works with the amount of natural pectin and sugar in that particular fruit.

I bought one kilo of the strawberry puree because that’s the one size it comes in, and cut it in half because I didn’t need that much candy and then I’d have a half in reserve in case the supposedly foolproof recipe failed.

I used the recipe and instructions here:
https://pastrychefonline.com/pastry-gems-pate-de-fruits/

After also referencing the original PDF from the Boiron website, which is apparently gone, but chefs are still passing around the formula on places like eGullet (https://forums.egullet.org/topic/157856-gone-missing-boiron-pate-de-fruit-chart/) I also got a tip from ChefSteps to soak the finished candy in Everclear to firm up the exterior:
https://www.chefsteps.com/activities/pate-de-fruit

Many of you might also be interested in “TEXTURE: A hydrocolloid recipe collection” which can be downloaded here:
https://khymos.org/wp-content/2009/02/hydrocolloid-recipe-collection-v3.0.pdf

While we’re on the subject; no, tartaric acid and cream of tartar are not the same thing. If your pate de fruit recipe calls for tartaric acid and you don’t have it on hand, look for one that uses citric acid instead? According to Jenni Field you should also be able to sub in lemon juice. I’d like to try it with lime juice the next time I make strawberry ones to cut the pure sweetness a little, too.

The thing is… the foolproof recipe failed. I think in the end my thermometer wasn’t accurate enough, I didn’t let it boil long enough, and my pectin was probably too old and partly broken down. After leaving it to set overnight and ending up with strawberry sludge, I reboiled it, added more pectin, and this time instead of testing by temperature, I went with Brix score on my refractometer (which had arrived in the mail that morning).

What Is a Brix Refractometer And How Do They Work: https://www.instrumentchoice.com.au/news/what-is-a-brix-refractometer-and-how-do-they-work

The end result was still too soft to cut with a knife, but was *just* firm enough to form into balls that I then soaked in Everclear for 2-5 minutes, let dry out for a minute or two, and then rolled in a mix of decorator sugar and regular crystal sugar. Just in case they didn’t stay firm and denatured over the course of the day, and because they were still a little tricky to pick up with fingers, I arranged them to be served on fancy spoons.

Some 12 hours later, when they were finally served, they were still in much the same shape they’d been when I rolled them in the sugar: firm enough to call candy, but still not as firm as desired.

I’ll give the other half of the puree a run before our next party, maybe, with lime juice, and see if I can get the science to work right? (Update: as of 2022 I have still not done this.)

I used the basics given by Sally’s Bakign Addiction:
https://sallysbakingaddiction.com/peanut-butter-balls/
but I changed a few things.

For the coating: I used about 80% of a semisweet Callabaut chocolate (they have it at Whole Foods in the cheese department) and made up the other 20% from either a Callabaut or Valrhona bittersweet.

For the peanut butter I was NOT going to use Jif or some store brand full of preservatives and stabilizers. I used Trader Joe’s Organic Creamy peanut butter. As predicted by the recipe, this resulted in a dry, crumbly filling… that is, until I added about a tablespoon of melted virgin coconut oil (also from Trader Joe’s). It didn’t add a noticeable coconut flavor and made the texture perfect.

Her instructional video on how to dip in the chocolate is spot on, though. I couldn’t find the spiral dipper tool she recommended in my local shop, but they did have one that was just a loop of wire, and that worked well except for the times when I tapped the dipped truffle on the glass too many times and the peanut buter center would weld itself to the wire.

I eventually figured out they came off the wire loop better when it was held sideways to dismount them rather than fully upside down. (And now I know why truffles often have a distinctive oval swirl on them!) Also a warmer/softer coating releases better.

but I used honey instead of sugar and water.

I brewed about two cups of quadruple strength Viet Assam (black) tea, by doubling the amount of leaves and doubling the steep time, then mixed it in a pot with about a cup of local wildflower honey, and simmered it until it was reduced back down to about 2 total cups of liquid.

I used the spiral slicer and cut the amount of water in half to intensify the pickles. 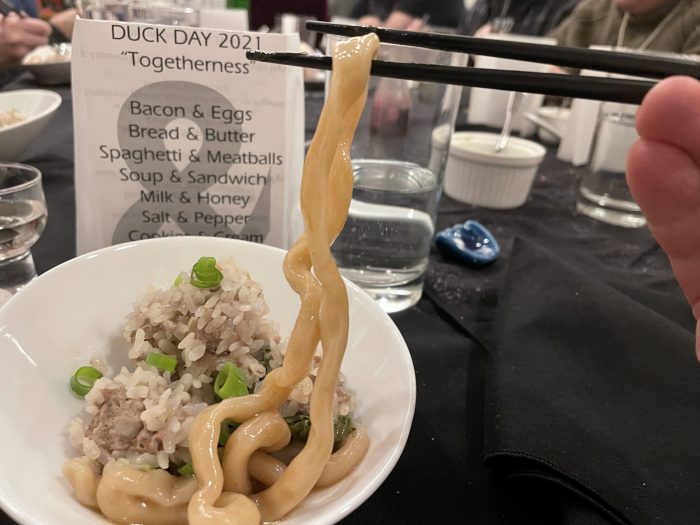 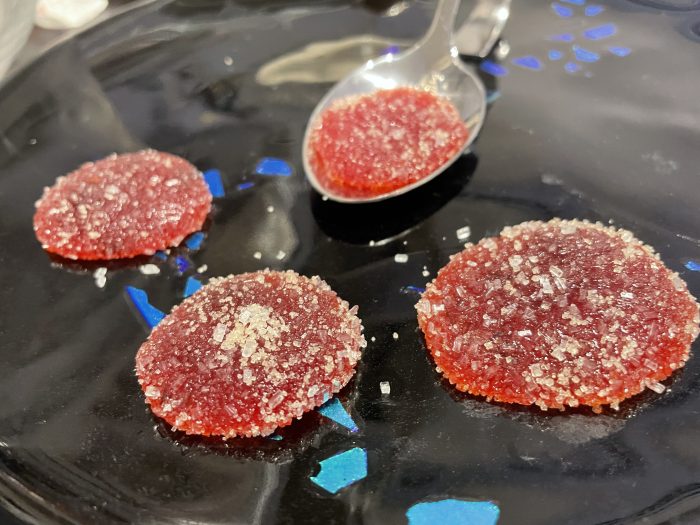 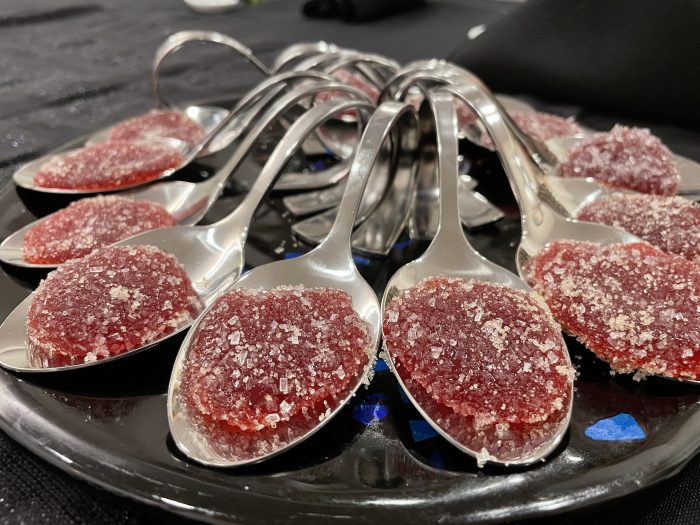