This ended up being less of a review and more of an essay on why I feel this book is a brilliant piece of modern literature that may go under-appreciated by critics.

I was lucky enough to get an advance reading copy of Francesca Lia Block’s new book Beyond the Pale Motel. Reading it turned me inside out. If you don’t want spoilers, the one thing I’ll tell you is that it’s by far the darkest of her books. It’s also heartrendingly, undeniably, a terrific work of fiction and one that lands smack in the middle of a moment in our culture when a lot of us find ourselves suddenly questioning the casual misogyny inbred in literature. This book stabs right at that Gordian knot with a bloody switchblade.

All the hallmarks and landmarks of a Francesca Lia Block book are here: the heat-shimmer of Los Angeles, the tapestry of pop music and fashion and Cali-spirituality, the female-centric narrative of chosen family. The book has a surety about it that defies (or perhaps defines new…) genre, something I love about all Francesca’s work.

Weetzie Bat — Block’s first smash hit novel — was a book that twenty-something goths could read with our little sisters (and later daughters) in the nineties, embodying all our young hopes and dreams, telling us that our inner magic would heal us and make it so our broken hearts didn’t end us but only made us tragically beautiful. Beyond the Pale Motel is at the opposite end of the spectrum, but it’s the same spectrum. Where Weetzie Bat is a gorgeous sunset while you’re putting on your make-up and party clothes heading out for a magical night, Beyond the Pale Motel is the dark hours of the morning when you shouldn’t get caught alone on the streets. Heartbreak and ruin lurk in the corners. The predators are out and it’s not safe.

This book is not safe. And it’s not meant to be. This book is the opposite of escapism. I confess I’ve been reading (and writing) so much romance lately that I’ve almost forgotten the true anxiety of reading a book where characters I’ve come to love are in jeopardy, where there’s no guarantee of love or a happy-ever-after. I grew up fully indoctrinated with the standard US literary canon and the prejudices (esp. sexism) that comes bundled in that package. It was only fairly recently–say within the last 4-5 years–that I finally took a hard look at how female characters are represented in literature (both the canon and current popular fiction). In book after book one finds all too often that the female character is there to function in the plot as an object for a man to either desire or protect. Whether presented as a girlfriend, sister, or other close relative, she’s so often raped or killed as a way to spur the male protagonist that it amazes me that lit-crit circles don’t flat out decry it as an untouchable cliche. But that’s how deeply ingrained this misogyny is: even the critics don’t see it. It was only after realizing this that I began to think that the existence of the romance genre might be specifically because it’s the one place female readers can retreat to where they know the one character they identify with won’t be raped or killed as a lazy plot device. To me the idea of literary “safe space” is a very legitimizing one and one that makes me feel good about writing romance as a refuge, as an escape.

But not all art is an escape. And one concept the male-dominated canon certainly carries is that the more challenging the art is, the “higher” the art is. Make no mistake, Beyond the Pale Motel will challenge readers. It challenges them with the brutal way it attacks and deconstructs these misogynist tropes and cliches–serial killers who target pretty women, the perceived flakiness of single mothers and drug addicts–and yet still encompasses and includes them. Francesca Lia Block’s books often have a thread of Raymond-Chandler-esque noir woven through them. In Beyond the Pale Motel, that thread of noir is stripped of its romanticism, exposed as sexist, and trampled into the gutter with the rest of the detritus of shattered illusions.

HERE BE SPOILERS:
Our main character Catt is a hair stylist, many years sober, in her late thirties now with her biological clock “ticking so loudly it would keep me awake all night.” Her life revolves around her best friend Bree and Bree’s son, Catt’s godson, Skylar. Catt’s past has various heartbreaks in it, and so do the pasts of most of the people she knows. When her own boyfriend Dash’s issues drive him to leave her at the start of the book, it begins a downward spiral Catt didn’t anticipate. At the same time, there’s a serial killer on the loose. At first I wasn’t sure if the serial killer was going to enter the actual plot or merely be a motif that paralleled all the casual misogyny and helplessness Catt experiences in life, from her intense need for men as lovers and protectors, to their utter failure to live up to either expectation when they turn out to be self-centered, shallow jerks–or when, like Dash, he turns out to be “like all of the other men I’d slept with, really, a man in pain.” The serial killer does enter the story, though. This is a murder mystery in the Chandler vein and yet, as I said, it’s the 21st Century rendition; the vaseline soft-focus lens is gone and now the murders are rendered in High Def digital TV.

And here’s the last bit about misogyny: I feel strongly that if Block were a male writer, this book would certainly be trumpeted as a modern-noir masterpiece. If this were written by Brett Easton Ellis, I think the literary establishment would be all over it as a brilliant exploration of the inner psyche of a woman in pain and the way she navigates the dangerous maze of modern life where every man she meets–the trainer at the gym, the baseball coach, an ex–could be a potential rapist or killer. But when a woman writes such a book, will the New York Times recognize that brilliance? Or will they merely squirm uncomfortably about a woman writer pointing out that, actually, every woman in modern life has to look at every man we meet as a potential rapist or killer? The newsmedia is rife not only with real life serial rapists but also misogynistic victim-blaming coverage: the television lamenting the ruin of the Steubenville rapists “bright futures” as athletes instead of the ruin of a young woman, period, full stop?

This is why this book is brilliant. Beyond the Pale Motel DARES you to blame the victim. If you do, you will hate yourself. As you should.

To pull off this anti-escapist trick, the book leaves behind genre: it abandons the optimism of romance and rejects the storybook justice of mystery. Instead it demands you surrender to a harrowing ride as seductive and frightening as the guy who gives you too much to drink. Thankfully, it’s a book, it’s fiction, and you can close the covers any time Catt’s reality seems too close to your own. That makes its lessons no less important; it makes them moreso. 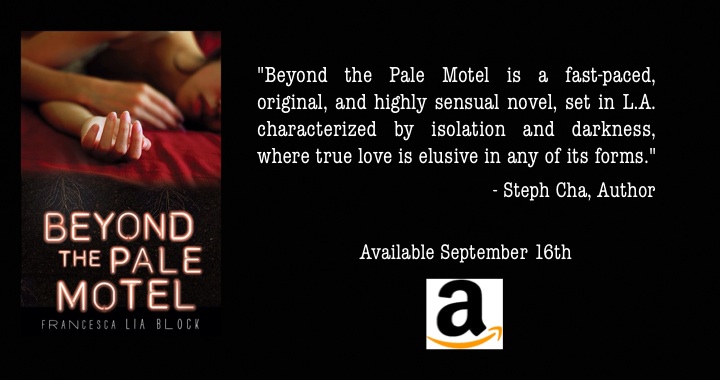