I’m sitting here in bed on the last night of RT Booklovers, with my knee up on pillows with an ice pack. Ouch. You see, at Heather Graham’s Vampire Ball, they had a charity fundraiser for a pediatric AIDS organization, where for five bucks you could dance with the cover model of your choice. So I danced with the delectable DeLonn Donovan, which was lovely. But then the next time I tried to stand up, my left knee was so swollen I could barely limp back to my room.
Great thanks to Sarah Frantz Lyons and L.A. Witt (aka Lauren Gallagher) who retrieved me a bag of ice. I did myself a mischief, it would seem!
I figure to recap the convention I should note a couple of things. Like how about my awards speeches? That’s a good thing to blog!
RT AWARD(S)
So I received two awards from RT this year. The Pioneer Award is given annually to a few “pioneers” of romance. Last year the pioneers were specifically for multicultural fiction. This year, it was for “genre fiction, the writers who opened the doors…and forged the way for the many subgenres we enjoy today.” The four pioneers recognized were myself, Sandra Brown, Patricia Burroughs, and Cherry Adair. 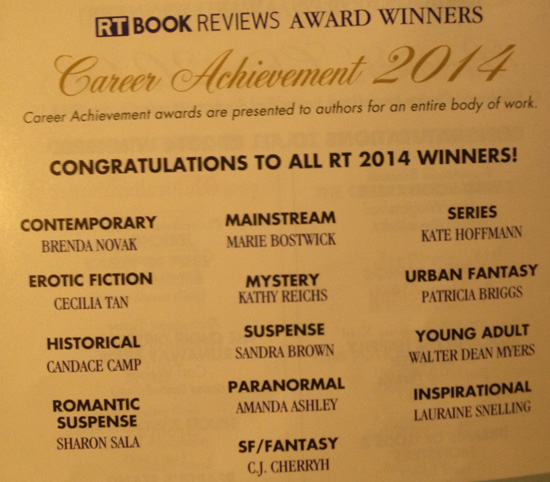 So that meant I had to give two speeches. The instructions were to thank the people we wanted to thank but to ALSO say something personal about our journey or ourselves…and keep it under 60 seconds. 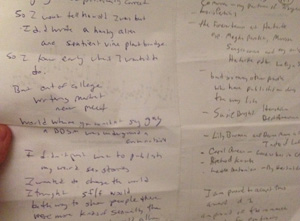 I know from my days as a radio disc jockey that 60 seconds is actually a pretty long time if you are focused about what you want to say, but a really short time if you don’t stay “on message.” The announcement of the winners had happened over a month ago, but I write best under deadline pressure, so about 20 minutes before heading to the ceremony, I wrote out notes for both speeches on the back of a piece of paper in handwriting that probably only I can read.
Now trying to reconstruct what I said from the notes and from my memory of yesterday, here’s an approximation of my speech(es). First, the Pioneer Award, which was sort of “part one”:
Thank you, thank you. You know, I wrote my first erotic short story when I was too young for it to be politically correct for me to tell you how young I was. So I’ll just tell you that it featured a hunky alien and sentient vine plant bondage. I guess that means I pretty much always knew what I wanted to do, which was write erotic science fiction and fantasy.
But when I was fresh out of college and bought that big tome of Writers Market and looked at all the markets in it where you could send erotic material, even pornography, not one of them would take science fiction. And of all the places that would take science fiction, not one would take erotica. This was 1992, and it was also a world where you couldn’t say the word “gay” on television and BDSM was so criminalized that if you didn’t keep your windows shut and your neighbors heard you, you could have your kids taken away. It was that bad.
So I didn’t start self-publishing just because I wanted to publish my weird little sex stories. I wanted to change the world. And I thought science fiction and fantasy would be the way to show people there were more kinds of sexuality than what the real repressive world allowed. Now, we have angels and vampires and BDSM all as staples of the romance genre. And we also have marriage equality in a lot of places and we have “grey” SM toys being sold at big box retail stores. So I guess I was a part of helping that happen. Thank you!
Career Achievement was kind of like part two:
So people sometimes as me “when did you know you ‘arrrived’?” I point to a moment back in 1993. Circlet Press and I had been publishing for about a year, and I was at the World Science Fiction Convention. I could not get a reading slot or onto panels or the program there. So I organized a reading off site, at a women’s sex toy and book store called Good Vibrations. And about 75-100 people followed me from the convention over to this other place to hear me read.
At one point we were in the elevator at the con, heading up to our room, and I heard someone stage whisper from the back of the elevator: “That’s Cecilia Tan!” And that’s when I knew I was getting somewhere.
I have a lot of people to thank on this long journey.
First of all corwin, my partner of 23 years,
and Lori Perkins, my longtime agent who always believed in me, even when it seemed like my career was going nowhere,
and the Forever Team at Hachette, especially Megha Parekh and Marissa Sangiocomo, and my original Hachette editor, Latoya Smith,
but there were so many other people who have published me along the way, including:
-Susie Bright, who bought my short stories for Herotica, and Best American Erotica
-Lily Burana and Deena Moore of Taste of Latex Magazine
-Carol Queen, who hosted that very first Good Vibrations reading in 1993
-dear departed Richard Kasak, a hoary old pornographer of Masquerade Books
-and Laura Antoniou who bought my stories for books like Leatherwomen
I am so proud to accept this award DANGIT I THOUGHT I COULD GET THROUGH THIS WITHOUT CRYING! (at this point I sniffled and teared up and yet managed to keep from crying TOO much because that would have really made my makeup a mess…!)
I am so proud to accept this award and I am so proud of the romance community for embracing the diversity of passions I represent.
Thank YOU, and be proud of yourselves for being part of a beautiful world.
(And then I cried some more and managed to make it off the stage without tripping on my dress, dropping the award on my foot, or smudging my mascara. Whew. Mom, I’m sorry I left you off the list by accident, between not being able to read my own writing, especially through tears, and getting emotional, I missed you. I did thank you in last year’s speech, though!)
Here is the YouTube video! (Thanks, Megha!) 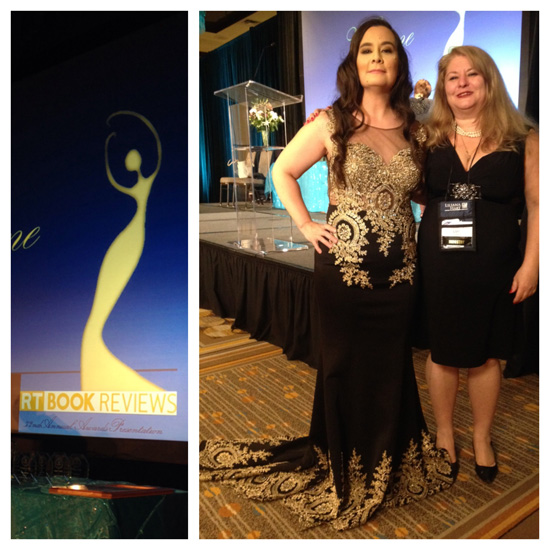 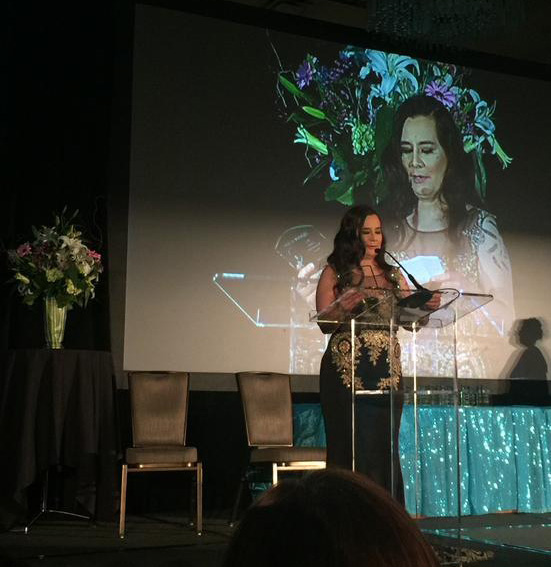