One of the cool things about BookExpo America is that there are seminars aimed at authors, publishers, and so on. For the past few years there has been a whole track of programming about the digital space and using digital tools for marketing and commerce.
Fauzia Burke (of FSB Associates) opened by explaining that agent Amy Hughes caught the flu and so didn’t make it, so it was just her and Kristen Frantz (VP of sales and marketing at Berrett-Koehler Publishers).
Fauzia began by answering the question, What is digital branding? “Think about what comes up when you do a Google search for a person. Your website, your social assets, etc.”
“I know the authors in this room are thinking I wrote the book, now I have to be a marketing expert, too? But yes, you have to think about why it’s important. The people who do digital branding get more speaking gigs and they spell more books. If you had a one tweet equals one book sale ratio we would all do it, right? It isn’t so obvious, unfortunately, and it’s not just a sales tool.” 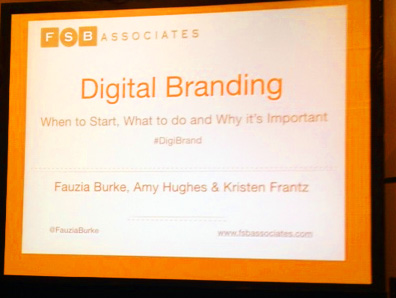