Last night we went seeking the wonders of the world. And we found them.
I had read on Twitter early in the evening that a “geomagnetic storm” was going on and that there would likely be amazing auroras to be seen, but corwin and I both had to work until 9pm and I didn’t even think of going hunting for it. But after we’d finished dinner, around 11 o’clock at night, I saw a photo on Twitter taken from the bay in Salem, Massachusetts that looked spectacular. Sure it was a long exposure photo, but Salem does not exactly have dark sky conditions and is very far south of where one normally thinks of seeing auroras.
I showed it to corwin.
“Want to go?” he asked.
“I’ll put on pants,” I replied.
By 11:30pm we were driving due north on I-93, not quite sure where we were headed other than “somewhere dark, somewhere north.” We looked at aurora prediction websites. On the scale from 1 to 9 used to measure aurora activity, it was then around 6.5 with predictions to hit 7 within an hour.
To the west, the moon was setting. At about 40% full, it looked huge as it neared the horizon, dipping into a sea of misty clouds, resembling the ragged billowing sail of a ghost ship on fire. 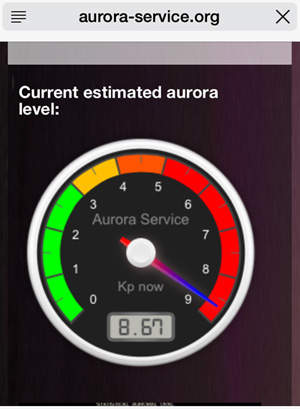 We blew past the first rest area in New Hampshire, a spot where we’d previous taken in the view of a wonder in the sky: the annular eclipse back in 1994. That time we’d ridden motorcycles from corwin’s house in the suburbs. We didn’t even live together yet, that’s how long ago that was.
This time we made our first stop at the next rest area further on, past Manchester. A lot of cloud cover was coming and going, but it looked like to the north it was clearer. Where could we go that was dark enough and where we could get a view of the horizon, without trees?
One thought that occurred to me was the Margate Resort, on the shores of large lake Winnipesaukee, which I knew of because it’s where MISTI-Con was just last month. But I wasn’t sure how well we could get away from lights there. “What’s the ski mountain in Laconia?” I asked corwin, who asked Google.
Gunstock. As soon as he said it I knew that’s where I wanted to go. We set the GPS for Gunstock Mountain and off we went again. And it was on a dark back road toward the ski resort that I suddenly pulled off the road and said, “That. What is making those trees backlit?”
“Isn’t that the glow from some city?” corwin asked.
“There’s no city that direction.” We jumped out of the car and looked a bit longer, but a house and lots of trees were in our way. All we could see was that the sky to the north was bright.
He was skeptical. We got back in the car. We drove not even a quarter mile when I again pulled off with no warning. “That’s it! That’s it!”
We were in front of a house with a cleared yard between it and a freestanding two-car garage. Between the house and the garage we could see in the distant sky what looked like a shimmering white curtain of light.
That was most certainly not the glow of a city. One large tree was blocking the view somewhat but there was no mistaking what we were seeing for city glow or anything else, the way the light moved, like a sheet of gossamer rippling. Then it turned more steadily bright. The aurora meter on the web said it was hitting close to 8. It was 1:30 in the morning at that point.
We decided to try to get away from the tree. Just a little further up the road we came to a genuine pull-off with gravel and what might have been a boggy area or a pond, judging by the loud croaks of bullfrogs and the mosquitos attacking me. From there we had a fairly good view due north above the tree line, but as we looked toward the glow, the clouds overhear thickened in. In just a few minutes we went from seeing a good many stars to completely none, and any view of the aurora utterly blocked.
Still, we considered it a completely successful trip. We’d gone with the intent of seeing the Northern Lights with the naked eye, and we’d succeeded, even if it was a brief view! (The one other time we’d seen them was from an airplane, on a red eye flight from Los Angeles to Boston, and they’d looked like giant green search lights glowing in the sky. We didn’t sleep, just watched the green glow for hours.)
Given that we’d gone that far, and that the aurora prediction was that it was going to go up even more in the next hour, we decided it made sense to stay out a bit longer and see if we could either figure out a clearer place to drive to, or wait to see if it might clear where we were. By that point we both had to answer the call of nature, though, so we drove back down the mountain to the Margate, which feels like home away from home by now. We used the lobby restrooms and had a nice chat with the overnight desk clerk, an elderly man from the area who suggested we might try Liberty Hill for a nearby spot where it’s very dark.
Our searches of Internet weather sites did not turn up anything helpful in the way of a cloud cover map. Far as I could tell ClearDarkSky is only useful for telling what the cloud cover is like where you *are* but not where to *go*, and is also nearly impossible to read on a mobile phone. And I swear radar weather maps used to have a cloud cover option, but nothing that we could find on our phones, it seemed.
So we went up Liberty Hill just to see, and although it was good and dark, and probably excellent for looking at meteor showers (for example), there were too many trees to get a good view of the horizon. So we drove back to the good pull off on the road to Gunstock and decided to just give it an hour to see if the clouds would clear. A small clear patch was visible in the west, and over the course of the hour it gradually moved eastward overhead, revealing the Milky Way, Arcturus setting in the west, and due north framed by the Big Dipper and Cassiopeia. But all we could really see was just a brightness, a glow, nothing distinct like it had been before.


At 3:30 am we decided we were probably starting to see the pre-dawn glow — after all, it was just the shortest night of the year mere days ago! — and we packed it in. We Googled up a 24-hour diner on the route home, and talked about cognitive science and epistemology and baseball — the things essential to the human condition — all the way there.
By the time we left the diner, dawn was imminent, and with all the odd cloud cover around the region, were treated to an intensely colorful and three-dimensional sun rise. And then, as if the universe wasn’t done showing us the wonders of the sky, we saw a rainbow.
All in all a very successful endeavor in looking up.
astronomy, aurora borealis, looking up, margate resort, northern lights