The panel on fantasy worldbuilding at ICFA was packed, every chair taken, people standing in the back, etc. I ended up sitting on the floor at the foot of the panelists’ table. It was well worth it! What I present here is a partial transcript of the conversation and I emphasize PARTIAL because I can only capture maybe half of what is actually said. I assure you if there are non-sequiturs or nonsense in what follows it is my fault in omission/transcription and not in what was said, which was highly intelligent, coherent, and thought-provoking.
Moderator, A.P. Canavan: Welcome to the annual fantasy panel where we try to get academics and writers in polite conversation with each other. Barring that we try for as much bloodshed as possible! (audience laughter)
The panelists:
Sarah Pinborough (BBC, The Dead House, Dog-Faced Gods)
Steven Erikson (Forge of Darkness),
Kameron Hurley (Gods War, Mirror Empire, etc)
Audrey Taylor (academic, Building Worlds- book on Patricia McKillip)

Mod: Our topic today is fantasy setting, worldbuilding and believability. From faerie to whole planets who have alternative ecosystems, etc. How can a world be both fantastic and realistic? What language can we use to describe fantasy settings?
Audrey: I am the academic on the panel, so I might have a radically different take on this than the authors. I am looking at worldbuilding as a holistic thing: it is more than setting, it is how characters interact with their landscape, what bits are going into the story, and how are they all integrated to make a world. So that’s how I’m coming at it, which may be different from an author. I’m trying to stay away from value judgements like “is it realistic.”
Kameron: David Hartwell was one of my writing instructors and he said “Kameron, you write so well you can make people believe utter nonsense and this can get you far!” If you are convincing and people read the book and say this author knows that they are talking about, then the reader will believe you. If your grammar is solid and the voice is compelling they will go with it. A lot of people throw one-off things in without thinking it through and what rabbit hole it might take them down. I will go anywhere with a writer who seems to have the skill to take me there.
Sarah: I think that any fiction is worldbuilding in itself. Even in a contemporary story you are creating that world. I am the least experienced world builder on this panel. But especially with straight fantasy in particular you already have the audience on your side. They are prepared to suspend their disbelief. Bad writing is bad no matter what genre you’re in. It may be that fantasy struggles with so many tropes that have been used so many times they may be bored with them. How do you bring a fresh approach?
Steven: I always think in terms of what you carry over from this world into the world you’re building. That’s the litmus test for me. Quite often a world is transposed. A time in our history like medieval Europe which is then dropped into a setting with magic and dragons. I check on these things because if you’re going to take a historical setting and transpose it you have to think through this because magic is going to change everything. Quite often that doesn’t happen. What you see is the patriarchy, the barbarians in the north, etc without recognizing that magic would change everything. I think it’s more useful to sever the ties with our world completely. What are the assumptions we make about our culture and why should they rise up again in this new iteration?

Moderator: Sarah, which was you book on the dead children?
Sarah: You mean the dying children. There wouldn’t have been much story if they were dead. The Death House.
Moderator: You do create a fictive world there. It’s all about creating a fictive reality that people will believe.
Sarah: People actually kept saying they wanted to know more about the world and the world building and I didn’t want to say more. Like I didn’t say this is my iPhone, it came from Apple. It’s just part of my world. People can tweet from space using it! I can’t even tweet from London sometimes. (audience laughter) But really I think it’s about getting the characters right and the world is there to support that process. 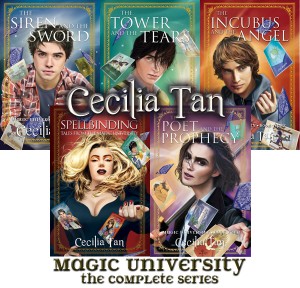