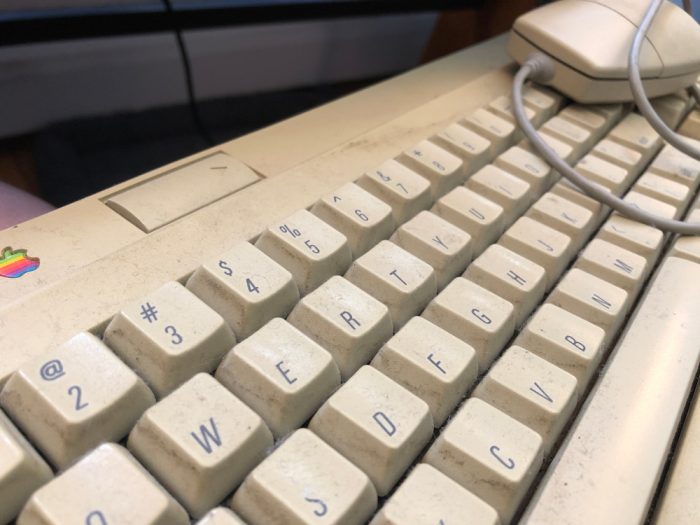 Today I was inspired to ship off this ancient, grungy Mac keyboard (see photo) that has been gathering dust and grime in my office for over 20 years. I’m in the midst of cleaning out my office in general, unearthing all kinds of interesting things in the excavation, but this one was sent not to the dumpster but to Midori, who is collecting objects from queer sex workers around the world to be woven into an art installation she’s calling “InVocation.”
She texted me to ask if I considered erotica writers (or myself in specific) to be sex workers, and here’s what I told her: “I don’t think most sex workers would consider us part of their group, but I do, at least from a political coalition standpoint, because erotic writing work is subject to different laws and restrictions from other writing work on the basis of the sexual content. We’re treated differently, our product can be outlawed or flagrantly destroyed with no recourse for us, our books are hidden, etc.”
When you write erotic work, even places like Patreon restrict you. Even when what you do isn’t illegal, they make your page un-findable from the search bar (you have to know exactly what URL to put in to find any X-rated artist). Amazon does the same, plunging not only individual books but sometimes whole keywords into the “adult dungeon” where they languish, unfound by searches. Erotic writing is reportedly more likely to be pirated or stolen than non-erotic writing, as some people both feel shame about buying it and NO shame about ripping off a mere “sex writer.”
Erotica writers have to fight harder to get paid than non-erotic writers do and we’re offered less for our work (compare the $50 a story standard for erotica anthologies to the 8 cents a word standard demanded by the Science Fiction Writers of America = $200 for a 2500 word story). This despite the adage “sex sells.” Even in the wake of 50 Shades of Grey, the top selling book in English-language history, many bookstores still have no erotica section, and those that do have one often won’t label it visibly. Some stores won’t carry it because they believe it’s illegal to sell to customers under 18 and they don’t ID their customers. And so on.
All those barriers — moral, structural, logistical, societal, and legal — makes making a living as an erotica writer even harder than making a living as any other kind of writer.
I’ve been living with this reality for so long that I sometimes forget it’s there. But at the RWA conference a couple of weeks ago I took a step back and had it hit me all over again. So many of the avenues for building a career, gaining readers, promoting a book, and so on are restricted to non-sexual content. For example, Facebook ads are a huge part of most of the marketing campaigns of top-selling books these days. But Facebook won’t let us advertise a book that’s too sexy unless we can plausibly make them look “clean.” (Heck, even the website where 50 Shades was first posted as a Twilight fanfic and built up a huge following had rules against explicit content! They were just ignored…)
Anyway. Midori is creating a sculptural art installation at the Leslie Lohman museum in New York City, as detailed in her post here: https://www.patreon.com/posts/i-need-your-help-28998508
The sculpture will be part of an exhibition called ON OUR BACKS, and it couldn’t be more up my alley. To quote from the exhibition’s description: “This exhibition explores the history of queer sex work culture, and its intimate ties to art and activism. [It shows] queer and transgender sex workers’ deep community building, creative organizing, self-empowerment, identity/desire affirmation and healing and the use of pornography as a deft tool for queer and trans liberation.”
Read the full description here: https://www.leslielohman.org/project/queer-sex-workers
My manifesto, as I’ve been banging the drum since 1992, is that stories change lives. Fiction changes hearts and minds. And I write about sex and sexuality because our society has so many fucked up ways of thinking about those things that the only way to change people toward thinking about them another way is to tell them a story. I write a lot of science fiction and fantasy to change the viewpoint as far from “normal” as possible, but even a story like Daron’s Guitar Chronicles is saying the same thing: we who don’t love within the narrow confines of society’s enforced “normal” of heterosexual vanilla marriage need freedom in this world to exist and to express ourselves as fully accepted human beings.
So, yeah, off my grungy old keyboard goes. I had thought maybe I had one of my old old original laptops — I had a Toshiba T-1000 back in 1989! — but it appears I recycled them long ago because of fears their batteries were dangerous to keep around. But I have clung to a lot of ancient tech. Macs haven’t used keyboard with this style of connector since… 1997? You can see from the grime on it that this keyboard had a lot of mileage on it.
Midori wrote that what she is looking for is objects that were used in sex work that we’ve held onto but we’re ready to let go of. “Objects, which even as you hold on to them, you would like to let it go, give it a new home, recognize that it doesn’t need to take up space in your drawers or storage or heart, or something you’d like to respectfully let it dissolve into the universe. ” I didn’t have a dried out old lipstick case, but I did have this.
I’m looking forward to seeing the final installation.
pornography is sex work, writing is art