I’m just back from a really fun night at the Harvard Bookstore thanks to a lively and uplifting panel discussion on romance of all flavors, held to celebrate the first ever national Bookstore Romance Day. If you haven’t heard of this type of nationwide event, it’s a thing encouraging visits your local independent record shop (on Record Store Day) or comic book store (Free Comic Book Day) or bookstore in general (Indie Bookstore Day).
This is a big deal because, let’s face it, some indie bookstores haven’t always been the most welcoming to the genre of romance. These days even the snootiest of literary culture stores will have mystery, science fiction, and the other fiction genres that grew out of the pulps of the 1940s, but many seem to think that romance is “trash” and therefore beneath them.
This is a trash opinion, of course, as I said on the panel.
But many indies in the wake of millennial feminism, scholarly studies on feminism and romance, and award-winning documentaries (not to mention a 2016 panel at BookExpo America on how to make your bookstore romance-friendly, and support from the American Booksellers Association and the RWA) are waking up to the fact that not only are they missing out on a billion-dollar fiction market, but romance has the same breadth and depth of talent, quality, style, and political messaging as every other genre.

In her intro to the panel, bookstore staffer Katharine told the story of how the Harvard Bookstore became romance converts 4-5 years ago. It started with staff members like her asking “Why don’t we sell romance?” and the negative answers eventually wearing thin. They added a section, and for the first year or so it didn’t do very well because for so many years romance readers had been told this bookstore didn’t carry “that kind” of book. But they gradually began to discover the change, and some previous romance-focused events helped spread the word.
“If there’s one thing that I’ve learned from reading romance novels,” she said, “it’s that sometimes you can make mistakes, but if you have someone who’s patient with you, you can earn people’s trust and a happy ending.” Now that the readers are feeling more welcome, the romance section is taking off and just doubled in size! (Not only that, once the Harvard Bookstore added romance to their shelves, publishers sales reps started nagging other indie stores in the area to do the same, since if the stuffiest of all booksellers could do it, why couldn’t they? I’m happy to report Porter Square Books has a nice selection, which I browsed and bought something from just last week.)
She then handed the mic off to our fabulous moderator, librarian and podcaster Margaret H. Willison, who kept the conversation lively all evening, giving each of the four writers ample opportunities to talk about what brought us to romance in the first place, how we had to overcome our own learned prejudices from the literary establishment, and why we feel writing love stories is so important.
The four of us write in drastically different sub-genres of romance, but what we found was that we had so much in common. Loretta Chase writes historical romance who had started out studying English literature. “What I found was that in these works of literature that I loved, though, was that the women in them, if they showed any spirit or interest in pleasure, they tended to end up dead. And I thought, well, if I write a book, I’ll fix that. Little did I know there was a whole genre of historical romance where writers were doing just that! The first one who really influences me was Edith Layton. I read one of her books and realized oh, here’s a woman who loves English history, who has a real ear for language, who writes beautifully, this is something I can get into!”


Satin Russell, by contrast, grew up in a household where her mom read a lot of romance and she probably read her first romance when she was 12 or 13. She does a lot of author events at various locations. “One was in a local Elks Lodge. Downstairs they were having the manliest event ever: a meat auction. Up comes this guy after the auction ended to check out the fair upstairs, a big guy in his Harley Davidson leather jacket and boots.” She’d previously come to expect men at bookstores to pooh-pooh her romantic suspense novels, even though they’re suspense. “But you know, men fall in love, too. Men have romance. Why shouldn’t they read about it?” (He bought both books.)
Kerry Winfrey writes YA romance and recently branched out (up?) into romantic comedies for adults, too. She was wearing earrings with Tom Hanks’ and Meg Ryan’s faces on them, which might possibly be the most awesome, on-brand accessory I’ve ever seen, given that her book is called WAITING FOR TOM HANKS. “I majored in creative writing in college and we were mostly reading literary short stories that were super depressing. So I was secretly reading YA romance and not telling anybody. It took me a while to realize that I didn’t have to only read things that were super depressing! The point where I totally tipped over was about three years ago when I had my son, and I was up at all hours of the night holding him because he wouldn’t sleep, and reading with my phone propped up in my other hand. That was when I realized this is really all I want to read and I don’t care if there’s some kind of stigma attached to it. When you’re that sleep deprived you can’t read something heavy.”

I told the story about how I came into romance via erotica, “Talk about a genre that people have weird ideas about and want to shame you for writing or reading!” And one of the main things that kept me from having to struggle with any kind of stigma around it was not just the fact that I was starting to do it at a time when feminism had a wave of sex-positivity (the early 1990s) but that my mom went all in on normalizing it, accepting it, and just expecting everyone in the family and friends to follow suit. And they did. She never acted like it was anything to be ashamed of, and so no one ever tried to shame me for it. If they had those kind of thoughts, they kept them to themselves!
When my first big book, Black Feathers, came out from Harper Collins in 1998, my mom threw me a book launch party in backyard of the house I grew up in, in suburban New Jersey, with a tent and a band and our favorite filipino caterers. It was exactly like the party people usually throw for their kid’s high school graduation. She invited everyone who’d ever known me while I was growing up, all our relatives, my dentist, my schoolteachers, you name it. So everyone just kind of had to take it in stride that it was something to be proud of. (More recently my mom has had me come speak to her book club a few times and had them read my books, yes, even the really sexy ones.)
The panel ended with a really fun bang, as Margaret showed each of us a photo of a cute guy and had us cast him as a romance hero and tell his backstory. This was a total hoot as the photos she had picked were early “before they were stars” headshots of Chris Evans (complete with earring), Dwayne “The Rock” Johnson (wearing the most confusing mix of bling and leather fanny pack — a photo which has apparently started a meme of people cosplaying as him?), Chris Pratt (with dark sideburns but long tousled blond locks), and young Stephen Colbert looking like (as I cast him…) “a young playwright about to drop out of his soul-crushing MFA program and reach his true creative dreams with the help of the supportive partner he’s always needed, but has never been able to admit his feelings for… until now! I think the gender of the partner is still in question, though.”
If you’d like to pick up some of our books, we autographed all the stock at the end, so if you missed the event, you can still go get the signed books. In fact, you can order the books pictured below directly from the event page on the Harvard Bookstore website. 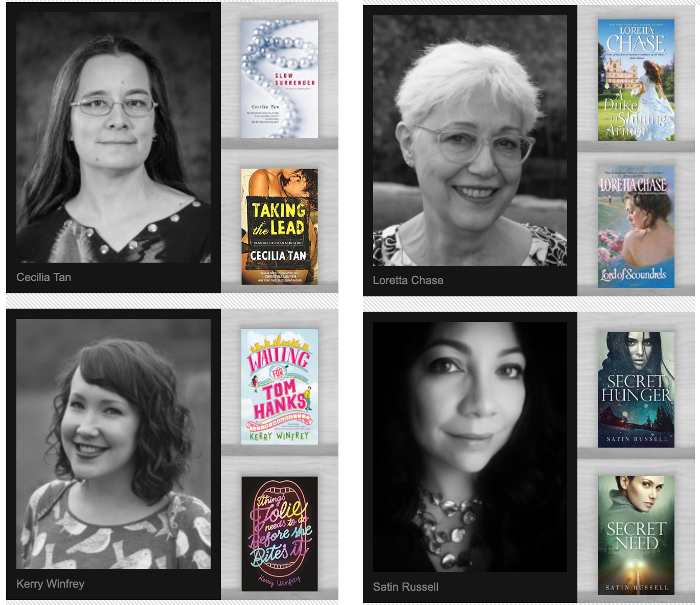