It has been a rollercoaster ride of emotions for me since December 23rd when the news broke that Courtney Milan was being censured by RWA, for reasons that were quickly revealed to be bullshit, opening a Pandora’s box of institutionalized racism, machiavellian social climbing, manipulative staffing, tails wagging the dogs, and so on. I pulled my book from the RITAs–but they later cancelled the awards and refunded all entry fees anyway. I then went to resign my membership, but realized it was up in February anyway. So I kept access to the forums and emails just in case things really turned around.
They haven’t. I was mostly happy to see the communique from the recently hired DEI consultant, Michelle Silverthorn of Inclusion Nation, but there is still so much to be done to regain my trust… I’m not sure the organization ever will at this point. And this is what I told them in my resignation letter, emailed today when a renewal notice popped up that said:
“Dear Cecilia, Thank you for another year as a member of Romance Writers of America. We know it has been a challenging one, and we appreciate you sticking with us. We have already begun building RWA 2.0, and in the year to come (and beyond) we are embracing a new chapter as an inclusive and equitable organization. We value your voice and your vision, and we hope you choose to remain a member to join us in this important work.”
I really want to believe those words. I do. But I feel burned by the ways that RWA has performed in the past.
I wrote:
Thanks for the reminder, but I’ve decided to resign my membership. I just can’t be a part of RWA any longer.
I didn’t join when I pivoted my career from erotic science fiction/fantasy into romance back in 2008-2009 because of all the garbage I had heard about racism, bigotry, and small-mindedness in the RWA. I had heard stories from other authors about how if I was writing anything erotic, kinky, queer, or featuring non-white characters (*all* of which I do) I could expect to be condescended to and that the information and contacts I would make would be of limited use.
Then Sylvia Day was elected president. Sylvia was important to me for multiple reasons, including the fact she wrote kinky erotic romances and that she, like me, is half-white/half-Asian. Talking with her at a book conference and then reading some things she had written as president convinced me to stick my head into RWA National in 2011 and attend my local conference. Shortly after that Courtney Milan–who, like me, is an outspoken advocate for diversity on Twitter and also half-white/half-Asian–joined the board, and I was convinced that things were truly changing. I joined. I entered the RITAs. I taught workshops at RWA national and for various regional chapter conferences, even keynoting a few. At the most recent conference in New York, between the diversity represented by the incoming board members and the statement made by the 2019 RITA award ceremony, I really believed the needed changes were truly taking root and that RWA was an institution that I could be invested in for a long time.
I don’t believe that anymore. That magical RITA night is forever tainted. It now feels like that ceremony used the voices of those trailblazers like Sandra Kitt and Radclyffe to paste a “politically correct” image onto a deeply racist, bigoted organization. And I don’t want to be used that way.
It’s going to take a lot to bring me back at this point. To borrow a phrase from Elizabeth Warren, it’s going to take “big, structural change.” RWA needs to be proactive on many fronts, not just regarding equity and inclusion within membership and its structure, but to be the powerful advocate for authors that it truly should be. RWA should be taking strong stances against delinquent publishers, against monopolistic practices by Amazon, against rights grabs by the Big 5, and many other issues facing romance authors today. I’ll be watching and hoping for that change to come. If it doesn’t, it’s not in the best interest of my career (or my mental health) to uphold a rotten status quo.
Thanks for listening.
-Cecilia Tan, Writer & Editor 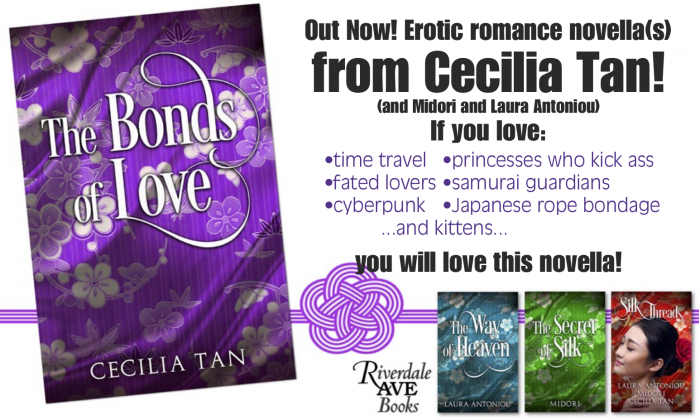