It’s no secret how much I love Harry Potter. Heck, for years I’ve been featured in many publications talking about my fandom and how after 15 years of being a professional fiction writer I started writing Harry Potter fanfic for fun. (Like this one or this podcast or this one, or this one…)
So when I heard my longtime literary agent and now publisher of Riverdale Avenue Books, Lori Perkins, was going to try to launch a line of books called The Binge Watcher’s Guides, and she was going to want to sign up many writers to each do their favorite TV and film series, I jumped on the chance to be the one to write the book on the Harry Potter movies!
To get the book and series off the ground, we’re running a Kickstarter, which will help to not only pay me a good rate, but raise the money needed for the kind of promotion and publicity necessary to compete in today’s book publishing market, which is tougher than ever. The campaign launched Wednesday, topped its first thousand dollars by Friday, and is well on the way to not only making the initial goal but hopefully reaching the all-important stretch goals, too!

To back the campaign: https://bit.ly/HPbingewatch

Among the rewards, which of course include the book, I’m also offering some virtual tarot card readings, and some other really fun stuff, like recipe cards for foods and drinks to make and serve at your Harry Potter movie marathon party!
The book includes tons of research I did, including dozens of fascinating casting stories, film-making innovations, and analysis of the place of the film series as a force in modern pop culture.
I’ve also got tips for throwing a binge-watch party, and advice on how and when to introduce the films to children for the first time. And of course recaps of each film, and a section for film fans on things you might want to know from the books.
Among the things I had forgotten until I went and looked back at it was the fact that the first film debuted right after the September 11th attacks. I think we were all ready for a little escape into a magical world at that point…
And I think during the pandemic people are looking to escape again, only this time from the safety of our own living rooms. There’s never been a better time to do a binge watch of a series, really.
So if you’d like to re-live the magic of discovering the Harry Potter films for the first time, or if you ARE discovering the films for the first time, come along with me to Hogwarts and beyond!
All backers get a discount off the regular retail price of the book and/or ebook, as well as exclusive rewards that can only be gotten through the Kickstarter. 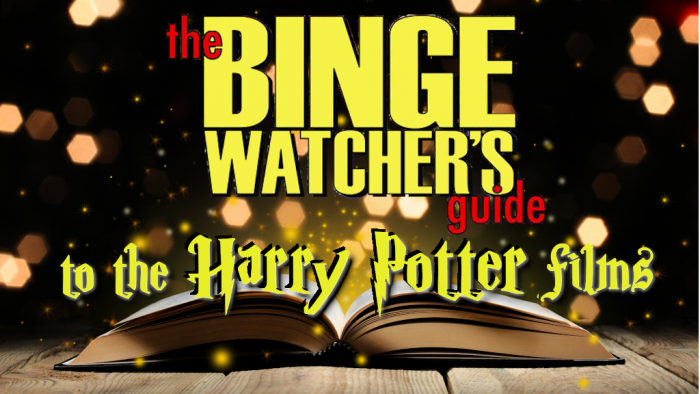