So I saw DH2 the other night in a midnight showing, at the Boston Common theater. The Boston Globe was there covering the event, as there were thousands of people there, many in costume, myself included. I had decided to wear my Slytherin tie.
Now, those of you who have known me for a while know I’ve identified as a Ravenclaw for years and years. Heck, my LJ default icon even says it. Haha! Even the name “Ravenna” is a reference to it! But?
But. I have to ask myself, if I’m such a Ravenclaw, why do I even OWN a green and silver tie? I picked it up second-hand for $1 and at the time I thought someone else might want it someday. But I wore it.
A Boston Globe reporter came up to me. “And which character are you?” she chirped.
“I’m just a generic Slytherin,” I answered. “In fact, I’m coming out as a Slytherin today.”
“You are?” She looked surprised. “But aren’t the Slytherins the bad guys that everyone hates?”
“Yes,” I said. “The Slytherins are the New York Yankees of the wizarding world. Everyone hates them because they’re the best.”
So here you have it, my coming out photo, which appeared on the front page of Boston.com the next morning! 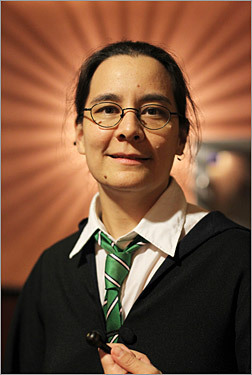 I had no idea why the photographer who was taking the shot for the paper asked me to move a little to the side. Apparently it was to capture the light streaks behind me to make what Francie